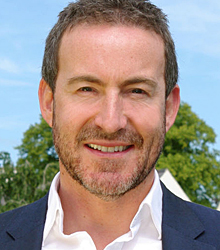 Gary McCausland is an established property developer, businessman and television presenter - having fronted three series of Five's 'How to be a Property Developer', Property Developing Abroad (Granada) and Axe The Agent? (BBC1). He also regularly appears on Sky News and BBC Breakfast News and has written the best selling book 'How to Make a Million from Property' (Anova, 2008).

Straight-talking, with an intuitive knowledge of the property market second to none, Gary is himself a successful property developer. Since 2002, his property company has taken control of the purchasing, designing, building, decorating and selling of 10 townhouses, 125 apartments and 25,000 sq ft of commercial property. New developments are ongoing, and his company's profile and success continues to grow, achieving a GDV of over £40 million.

Gary was born in Belfast, Northern Ireland and grew up in a town called Dungannon throughout the troubles in the 70s and 80s. He is the eldest of seven siblings, two girls & five boys, and is no stranger to hardship. It was during these days that the first dreams of being a property developer were born and he obtained an honours degree in Estate Management and a Post Graduate Diploma in Accountancy from the University of Ulster and now is a Chartered Surveyor.

From 1992 to 2002, he worked his way up the corporate ladder, first as a Management Accountant and then as a Property Manager for Cable and Wireless, taking on a senior UK Management role from 1993 - 1998. He then moved to US telecoms giant MCI and became their International Estate's Manager. Gary says: "After around ten years on the corporate ladder, buying & selling literally hundreds of properties across the world, it was time to fulfil my own ambitions".

Everyone was extremely pleased with Gary McCausland, we felt he was perfect for the launch event, especially with his knowledge of the market, the business and the house building industry. His presentation went down well and everyone found it extremely interesting and relevant to our needs on the night. Hopefully we would like to work with Gary in the future as we continue to promote our REHAU Easy Heat System.

Gary's plain speaking owes a little to Simon Cowell, but he knows what he's talking about.

When it comes to property this man knows his stuff

Clients often ask about purchasing books for giveaways and delegate packs. Below you’ll find a selection of products by Gary McCausland. Click the images to view on Amazon's website. For bulk orders, please speak with your Booking Agent.

How to book Gary McCausland for your event