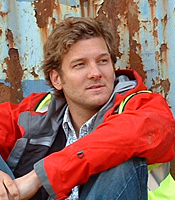 Charlie Luxton is an architectural designer who combines his design work with writing and presenting television programmes. He is passionate about the environment and communicating his enthusiasm for sustainable architecture and eco-friendly design.

In 2008 Charlie became the face of Architecture and Design on Five. He presented the first series of I Own Britain's Best House and was later given access to landmark buildings, including the Bank of England, for Behind Closed Doors. His most recent projects for the channel include the returning series Build a New Life in the Country, and Best House on the Street. He has also filmed both the first and second series of Vertical City for Gallery HD.

Charlie Luxton's other television credits include the ITV1 series Homes and Property (2007), a one off documentary for BBC Radio 4 entitled The Perfect House (2007), and Restored to Glory (2005), a prime time BBC2 series covering architectural restoration. He also presented and wrote Not All Houses Are Square (2001) - a three part series for Channel 4, followed by a second series Not All Bricks and Mortar (2001).

Charlie Luxton was born in Sydney, Australia and has lived in England since 1983. He became a founding director of Free State in 2000, the design and communications company that uses the built environment to create awareness far beyond the reach of traditional media.

Recent projects include Zoomorphic, an exhibition for the V&A and Electric Storm, a 3 month renewable energy event on the South Bank in London. In 2005 he left London and Free State to focus on sustainable housing. As Charlie Luxton Environmental Design he is currently working on several sustainable housing projects in London, Wiltshire, and the Cotswolds, where he now lives.

Charlie's passion for sustainability and the environment extends beyond his professional work to include his home life too. As well as completing an eco-friendly renovation on his own home, Charlie has now led his village of Hook Norton, Oxfordshire, towards being chosen as a winning low-carbon community and being awarded with the Government's Low Carbon Community Challenge grant of £400,000.

Various eco-measures will be implemented across the whole village to help reduce its energy use, ranging from insulation and double glazing to solar panels and two smart cars for the use of all villagers!

He can speak in both a conference keynote and after dinner capacity, and his speeches have covered a wide range of topics relating to architecture, sustainability and design, from offices and housing to termites and fog basking beetles!

Charlie Luxton draws on this passion for sustainability in his lectures and speeches, often focusing on green-living, sustainable architecture and the role climate change has in altering the built environment.

Charlie can tailor his speeches to cover a series of core messages that empower the listener to view climate change as a key driver to positive outcomes in society, rather than just negative, referencing the client's achievements in this area to help illustrate the wider issues.

Thank you for you excellent presentation yesterday. The feedback that I received was that it was great to hear a guest speaker with views on the industry that were current and thought provoking. The only negative was that people in the other sessions wished they had been able to attend - so next time, you may be presenting to more people!

Please accept my warm personal thanks, and those of Coventry City Council, for the excellent way in which you introduced and chaired the Symposium last week. The way you did this was key to its smooth running and success. It was a pleasure to meet you and listen to your opening remarks which set the scene for the presentations which followed. The way you facilitated the individual Q&A sessions and the panel discussion was a highlight of the day for many. Delegates from other cities and organisations have also expressed their thanks for a stimulating conference and your contribution to it.

Many delegates have said that a highlight was the fantastic rapport and debate Charlie Luxton developed with the speakers. The questions he asked captured the audience's interest and kept the whole day running smoothly.

The Future of the Modern City Conference.

I would like to thank you for your valued contribution to this year's conference. You managed to chair a session that conveyed some very technical information in a way that participants will not forget and I am sure that the format will be repeated again in the future. Thank you once again for taking the time out of your busy schedule to be with us and I hope we have the opportunity to work with you again soon.

...thank you so much for your contribution... your presentation was excellent and very well received, once again thank you for all your efforts in putting it together!

The feedback from our partners, tenants and colleagues was nothing but positive. Charlie was the exact person we needed on the day, he was a great personality to have with us and chatted to all guests.

Clients often ask about purchasing books for giveaways and delegate packs. Below you’ll find a selection of products by Charlie Luxton. Click the images to view on Amazon's website. For bulk orders, please speak with your Booking Agent.

How to book Charlie Luxton for your event