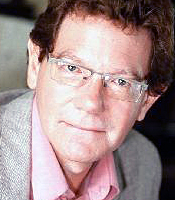 Maxwell Hutchinson was President of the Royal Institute of British Architects from 1989 to 1991. He is a practising architect and regular radio and television broadcaster. In the year 2000, he was runner up for the 'BT Regional News Presenter of the Year Award'. He has two weekly features on BBC London 94.9FM; covering London's architecture, landmarks and 'Lost London', which is broadcast live from the streets and covers London's history.

He also has a regular feature on BBC London, 'The Max Files', which is currently looking at hidden London and he is a regular contributor to BBC radio 4's 'You and Yours', 5 Live's 'Late Night Live' and BBC2's 'Newsnight'. Amongst his credits, he has written and presented three series (90 x 30 minute programmes) for Discovery TV on architecture, engineering and science ('Prefabs and Palaces', 'Mod Cons' and 'Pure Inventions') as well as two half hour programmes for BBC2 'First Sight' covering Glass Houses and the London Skyline.

His fourth series for BBC Radio 4 - 'Let There Be Light' transmitted in June 2001 and more recently, he was part of the BBC1 'live' commentary team for the Lord Mayor's Show for the second year running. He was also part of the BBC team for 'Children In Need' and presented 'live' from Piccadilly Circus.

His better known buildings include Skylines on the Isle of Dogs, JS Pathology's Headquarters at Camden Lock, Aztec Row in Islington and Pink Floyd's recording studio in Britannia Row.

Apart from his work, he enjoys composing music, and playing the piano and the guitar.

Maxwell Hutchinson has given numerous talks and has 'chaired' many events including the Building Design 'Presidential Debate' and the 'Corus Construction Awards'.

He is a versatile and humorous speaker and provides highly constructive motivation talks for a wide variety of clients. He has also chaired a plenary session at the CBI conference.

Clients often ask about purchasing books for giveaways and delegate packs. Below you’ll find a selection of products by Maxwell Hutchinson. Click the images to view on Amazon's website. For bulk orders, please speak with your Booking Agent.

How to book Maxwell Hutchinson for your event