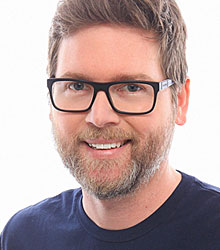 Christopher "Biz"Stone is an American entrepreneur best known as the co-founder of social media platform Twitter. A progenitor of social media, Bizhas been developing large-scale systems that facilitate the open exchange of information for nearly two decades.

Bizis also an active angel investor, board director, public speaker, and a prominent philanthropist. He has been named Nerd of the Year by GQ, one of the Most Influential People in The World by TIME magazine, Entrepreneur of the Decade by Inc Magazine, one of Vanity Fair's Top Ten Most Influential People of the Information Age, and was honoured with the International Centre for Journalists' first Innovation Award.

Biz is best known for over a decade of developing collaborative web systems freely accessed by hundreds of millions of people worldwide. As a progenitor of the early social web, he became an Internet entrepreneur in 1999 and went on to work for Google in its formative years. Later, Biz Stone co-founded Twitter along with Jack Dorsey, which launched in 2006.

In June 2011, with his long time collaborators Evan Williams and Jason Goldman, Biz Stone co-founded The Obvious Corporation to focus on building systems that help people work together to improve the world. In addition to deploying time and resources to outside projects, he works with the Obvious team on their main effort, a publishing platform called Medium.

An adamant believer that when we help others, we also help ourselves, Biz Stone supports a new way of doing business with a higher level of ambition, and a better, more altruistic way to measure success. Beyond immediate needs, he advocates selflessness; insisting we follow this path in order to deliver deeper meaning in our work and in so doing, place value before profit.

Biz Stone holds an honorary Doctor of Laws from Babson College, membership in the Senior Common Room at Exeter College, Oxford, is an Executive Fellow at UC Berkeley Haas, and an Associate Fellow at Said College, Oxford. He has debated at the Oxford Union and won on whether or not entrepreneurs can affect positive change with regard to the world's biggest problems.

Along with his wife Livia, Biz Stone was named a Huffington Post Game Changers for their work and impact in the field of public service. Biz operates The Biz and Livia Stone Foundation supporting education and conservation. He serves on the advisory board of Donors Choose-an online charity that makes it easy for anyone to help both teachers and students in need.

Biz Stone became a vegan after visiting Farm Sanctuary, an American animal protection organisation, and is involved in causes including animal welfare, environmentalism, poverty, health, and education. His Obvious Corporation backed Beyond Meat in 2012, a start-up which makes vegan meat analogues that taste and feel like real meat.

• Redefining Success
Business, culture, and even our shared human condition is changing at a breathtaking pace. New perspectives, new ideas, and new techniques for successfully embracing this change are needed now more than ever. Biz Stone will share stories of creativity, empathy, innovation, and entrepreneurial spirit showing us a new way to move forward with a new definition of success.

• Confessions of a Creative Mind

Biz Stone was a huge hit at the World Knowledge Forum, charming the audience with his easy-to-connect speech and friendly approach. We are sure he will continue in his dynamic tracks and we will definitely invite him again to next year's Forum. Last but not least, thank you for keeping up with us and for your continued support!

The Q&A segment was executed brilliantly. It truly became what we wanted it to be – an intelligent and honest dialogue about the role and impact technology plays in how society engages and connects.

Biz was absolutely amazing today! The whole group so enjoyed getting to hear his story and vision for the future.

Biz's speech really resonated with the nearly 13,000 attendees. The Q&A segment was executed brilliantly. It truly became what we wanted it to be - an intelligent and honest dialogue about the role and impact technology plays in how society engages and connects. The twitter sphere is a key example of how salient and timely Biz's topics struck an emotional chord.

Clients often ask about purchasing books for giveaways and delegate packs. Below you’ll find a selection of products by Biz Stone. Click the images to view on Amazon's website. For bulk orders, please speak with your Booking Agent.

How to book Biz Stone for your event