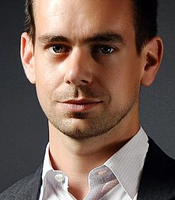 For anyone who doesn't Tweet, Jack Dorsey is an American software architect, businessman and the creator of Twitter. He is also the founder and CEO of Square, a mobile payments company which processes more than US $10 billion annually.

Born in Saint Louis, Missouri, Jack exhibited a strong degree of knowledge and appetite for software design from an early age. By the time he turned 13, he was fascinated by the technological challenge of co-ordinating taxi drivers, delivery vans and other fleets of vehicles that needed to remain in constant, real-time communication with one another. So he created an open source dispatch software that still remains in practice today for many taxicab companies.

That background in dispatch software design ultimately led Jack Dorsey on to the project that was to be Twitter when he considered the idea of merging dispatches with AOL Instant Messaging and the blogging platform Live Journal. Along with colleagues Biz Stone and Evan Williams, Jack started a new company, called Obvious, which later became Twitter. Jack built a simple prototype of the micro blogging platform in just two weeks, where users could post short messages of 140 characters or less, known in Twitter parlance as ‘Tweets'. He came up with the idea for a site that would combine the broad reach of dispatch software with the ease of instant messaging, "what if you could share your status with all your friends really easily, so they know what you're doing?". He was initially the Chief Executive Officer, then quickly escalated to Chairman of the board and is now Executive Chairman of Twitter.

Regularly touted as one of the hottest start-ups in the technology industry, Square, launched in 2010, produces a small credit card reader that plugs into the headphone jack of a smart phone or a tablet, enabling even the smallest-scale business owners to accept credit card payments. The service offers free registration and Square takes a 2.75% fee from each transaction.

One of the new breed of young entrepreneurs, as a keynote speaker Jack Dorsey shows international audiences exactly what it takes to create and successfully lead a start-up company even in difficult times. He also explains how new social media is changing the way we communicate and do business and how "Immediacy, Transparency & Approachability" can make social media a powerful communication tool. His three guiding principles, which are shared by the whole company and through its culture, are simplicity, constraint, and craftsmanship.

In 2008, Jack Dorsey was named to the MIT Technology Review TR35 as one of the top 35 innovators in the world under the age of 35. And in 2012, The Wall Street Journal gave him the "Innovator of the Year Award" for technology.

How to book Jack Dorsey for your event