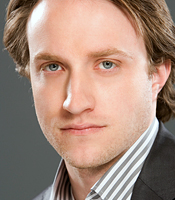 Chad Hurley is the co-founder and former Chief Executive Officer of YouTube - the world's largest and most popular video sharing site and the third most visited site globally. In June 2006, he was voted 28th on Business 2.0's "50 People Who Matter Now" list.

Prior to YouTube, Chad worked in eBay's PayPal division where one of his tasks involved designing the original PayPal logo. He then co-founded YouTube with fellow PayPal colleagues Steve Chen and Jawed Karim. He was primarily responsible for the tagging and video sharing aspects of YouTube.

Chad Hurley grew up in Pennsylvania, USA. Since childhood he showed extreme interest in the arts, but then later became interested in computers and electronic media during high school. He was a stand-out runner for Twin Valley High School's cross-country program, which won two of its PIAA State titles with him as a member in 1992 and 1994. He was also member of the Technology Student Association during high school. He graduated from Twin Valley High School (Pennsylvania), Elverson in 1995 and went on to receive his BA in Fine Art from Indiana University of Pennsylvania in 1999.

Equal parts businessman and Silicon Valley maven, Chad's transition from working at PayPal to founding and growing YouTube has truly become the stuff of legend in business, technology, social and educational circles around the world. In October of 2007, Chad and his partner sold YouTube to Google, Inc. for $1.6 Billion and still serves as the company's advisor.

Currently, it is estimated that YouTube attracts over 900 million unique users watching over 4 billion hours of video each month with 70% of its traffic coming from outside the US. Additionally, 100 hours of new video is uploaded every minute -- a rate that shows more content being uploaded in less than a month than the combined three US networks created in its first 60 years.

Chad Hurley stepped down as CEO of YouTube in October 2010 and stated he would stay on as an advisor of YouTube, allowing Google's Salar Kamangar to take over the CEO position. Soon after selling YouTube, Chad co-founded AVOS Systems, which is committed to creating platforms and building products that enable individuals to utilise their time more efficiently in their everyday life.

As a globally sought-after keynote speaker, Chad Hurley discusses the rise of YouTube and managing its meteoric growth. He shares the lessons learned from the unique experiences of creating a "game-changer", "status quo disrupter" and "new standard" in technology and how content is consumed and shared in the modern era. He also explains what's next in the ever-evolving landscape of emerging technology, the shifting paradigm of media production and distribution and how YouTube continues to evolve in order to stay on top.

Finding the Golden Ticket
The key to a successful product is identifying a gap in the market and creating a product to address it. When Chad Hurley realised the Internet lacked a place to effectively distribute and share video he created YouTube. His new endeavor, MixBit, was born from this philosophy, capitalizing on the absence of user-friendly tools to create content. Chad will discuss the challenges he faced launching YouTube and MixBit and share the lessons he¹s learned.

The Entrepreneur¹s Question: What's Next?
As any successful entrepreneur will tell you, the thrill is in the search. Chad Hurley began his career as one of the 10 employees at PayPal, leaving to start-up YouTube and then launch MixBit. Chad will speak about the entrepreneur's drive to find the next big thing once you have had a taste of success and share his steps to execute your idea.

How an Artist Conquered Silicon Valley
With his fine arts degree in tow, Chad Hurley successfully launched one of the world¹s most popular sites, proving that creativity and marketing are just as powerful as the super knowledge of a computer engineer. Chad will discuss how his fine arts education and passion for design helped him to build YouTube.

Chad Hurley was great! The students loved him. We had more than 600 people at the lecture and he was great with them one-on-one as well. He is really patient and accommodating. Thanks for all of your help with the event. The Dean was thrilled.

How to book Chad Hurley for your event