The world's most famous computer hacker 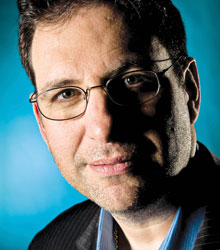 With more than fifteen years of experience in exploring computer security, Kevin Mitnick is a largely self-taught expert in exposing the vulnerabilities of complex operating systems and telecommunications devices. His hobby as an adolescent consisted of studying methods, tactics, and strategies used to circumvent computer security, and to learn more about how computer systems and telecommunication systems work.

"Security is not a product that can be purchased off the shelf, but consists of policies, people, processes, and technology".

In building this body of knowledge, Kevin gained unauthorised access to computer systems at some of the largest corporations on the planet and penetrated some of the most resilient computer systems ever developed. He has used both technical and non-technical means to obtain the source code to various operating systems and telecommunications devices to study their vulnerabilities and their inner workings.

As the world's most famous hacker, Kevin Mitnick has been the subject of countless news and magazine articles published throughout the world. He has made guest appearances on numerous television and radio programs, offering expert commentary on issues related to information security. He has served as a keynote speaker at numerous industry events, hosted a weekly talk radio show in Los Angeles, testified before the United States Senate, written for Harvard Business Review and spoken for Harvard Law School. His first best-selling book, The Art of Deception, was published in October 2002 by Wiley and Sons Publishers. His second title, The Art of Intrusion, was released in February 2005.

The Art of Deception: Are YOU In Danger of Being 'Conned'?
Hear the world's most famous former hacker share his perspective on the threat of "social engineering", a highly effective type of attack that exploits the human element of corporate security.

The Art of Intrusion: How Hackers Compromise Your Security and What You Can Do About It
To truly protect your organisation's valuable information, you must move beyond knowledge of the dangers and learn from real, "you are there" case studies. Kevin. Mitnick shares how hackers ply their trade and offers concrete and actionable guidance to help you strengthen your defences.

Wireless Insecurity: Is Your Network Vulnerable?
The use of wireless networking is becoming ubiquitous throughout the world. Countless businesses, government agencies, academic institutions, and teleworkers have deployed wireless networks in their computing environment. As a result, those organisations have opened up their networks to data thieves, vandals and hackers. Lulled into a false sense of security, many organisations believe the risks associated with their wireless connectivity is minimal based on the belief that these wireless signals only extend to the four walls of their organisation or facility.

The Truth Behind the Myth of Kevin Mitnick
Most people's conceptions of who the real Kevin Mitnick are derived from media-created myths. Kevin Mitnick has been fascinated with technology since early childhood, however, he was never a malicious hacker and his hacking was never performed for personal gain or to cause damage to systems. His pursuit of hacking was purely to satisfy his intellectual curiosity, and, contrary to many inaccurate reports, he never destroyed data or profited from his exploits.

Kevin Mitnick's talk at Microsoft was a huge hit. He was charming, funny and definitely in the zone. The talk covered his early childhood pranks, illuminating how he developed the hacker instinct that ultimately got him into trouble. We look forward to the movie that will be based on “Ghost in the Wires”! Thanks much to Kevin for joining us!

The Webinar [on social engineering] with Kevin was fantastic and we have received lots of positive feedback about the event. Kevin is a great speaker with tons of wit and a flair for making points thoughtfully.

Kevin Mitnick has a unique ability to connect with both technical and non-technical groups, which makes him a perfect fit for almost any event, especially those audiences that run the full gamut of technical ability. Die-hard techies will enjoy “geeking out” with Kevin, and everyone else will still be fascinated and perhaps a little frightened by what they learn. Our attendees could not have been more pleased with Kevin and his “Art of Deception” keynote.

Kevin Mitnick's presentation was not only informative and entertaining; it also brought home some very relevant information security issues. The audience was captivated by his live demonstration of what information is available at the click of a mouse.

Clients often ask about purchasing books for giveaways and delegate packs. Below you’ll find a selection of products by Kevin Mitnick. Click the images to view on Amazon's website. For bulk orders, please speak with your Booking Agent.

The world's most famous computer hacker