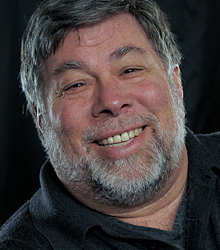 A Silicon Valley icon and philanthropist for more than thirty years, Steve Wozniak has helped shape the computing industry and influenced the popular Macintosh.

Steve Wozniak met Steve Jobs when a fellow high school student introduced them to each other. In 1970, they became friends when Jobs worked for the summer at Hewlett-Packard, where Wozniak was working on a mainframe computer. In 1971, one year after enrolling, Wozniak withdrew from the University of California, Berkeley and developed the computer that eventually made him famous.

Single-handedly he designed the hardware, circuit board designs, and operating system for the Apple I. He and Jobs were largely working to impress other members of the Palo Alto-based Homebrew Computer Club, a local group of electronics hobbyists very interested in computing. The Club was one of several key centres which established the home hobbyist era, essentially creating the microcomputer industry over several years. Unlike other Homebrew designs, the Apple had an easy-to-achieve video capability that drew a crowd when it was unveiled.

The Apple I was priced at $666.66 (because Wozniak likes repeating digits). They sold their first 50 system boards to Paul Terrell, who was starting a new computer shop, called the Byte Shop, in Mountain View, California. In 1981, he went back to UC Berkeley and finished his degree in electrical engineering/computer science.

For his achievements at Apple, Steve Wozniak was awarded the National Medal of Technology by the President of the United States in 1985, the highest honour bestowed on America's leading innovators.

In 2000, Steve was inducted into the Inventors Hall of Fame and was awarded the prestigious Heinz Award for Technology, The Economy and Employment for single-handedly designing the first personal computer and for then redirecting his lifelong passion for mathematics and electronics toward lighting the fires of excitement for education in grade school students and their teachers.

Through the years, Steve Wozniak has been involved in various business and philanthropic ventures, focusing primarily on computer capabilities in schools and stressing hands-on learning and encouraging creativity for students. He founded the Electronic Frontier Foundation, and was the founding sponsor of the Tech Museum, Silicon Valley Ballet and Children's Discovery Museum of San Jose.

In keynote speeches, Steve Wozniak’s core areas of interest are:
- The founding of Apple computer
- How to foster creativity and innovation in a technical environment
- How to breed an entrepreneurial mindset in a corporate culture
- iWoz, his autobiography
- Robotics and automation
- Education

Steve Wozniak takes a very customised approach to each presentation he delivers and speaks directly with the event host to ensure a topical focus that is unique, conversational and an excellent tie-in with the overall event. The result is a highly personalised, unforgettable talk delivered by one of the most influential pioneers of the technology industry.

Steve Wozniak was a big hit — very personable, friendly. He is so excited and proud to talk about his life and accomplishments. That energy certainly came through. We received lots of good feedback.

Steve Wozniak's session at the 2015 NAMM Show will be talked about for years to come. His unique insights on innovation and creativity inspired the audience to look at their businesses differently. Our members were blown away by his generosity, wisdom and authenticity. He's a living legend, and at the same time, he couldn't be easier to work with. He received a standing ovation like we've never seen at a show.

Steve Wozniak's dynamic personality, unique vision, and astute knowledge created a session that NAMM's audience will never forget. His storytelling was compelling and it came completely nature to him. I enjoyed how he would go on tangents giving the audience a sneak peak into untold stories, which created an authentic moment for them. Woz is truly one of kind!

Thank you so much for everything you have done for us during your stay. The amount of feedback from today's staff session has been phenomenal, – they could not be more excited. Our clients also thoroughly enjoyed the opportunity to engage in open conversation with you. Your honesty, genuineness, passion and great story telling ability wowed everyone and delivered a truly unique experience for our staff and clients alike. You have both been so lovely to engage with over these past few days and made it such a joy to hold this event.

I've had the pleasure of featuring Steve Wozniak across several conferences in 2014 and enjoyed working with him immensely. His enthusiastic personality translates to a fantastic keynote, and his generosity off stage connecting with attendees had the entire event buzzing. Woz is akin to the Santa Claus of technology — all those that cross paths with him can't help but be charmed and delighted.

Clients often ask about purchasing books for giveaways and delegate packs. Below you’ll find a selection of products by Steve Wozniak. Click the images to view on Amazon's website. For bulk orders, please speak with your Booking Agent.

How to book Steve Wozniak for your event