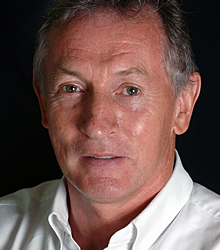 Steve Ridgway was Chief Executive Officer for Virgin Atlantic between 2001-2013. During his time at the airline, Steve saw Virgin Atlantic grow from two 747s to a fleet of 40 long haul aircraft - flying six million passengers a year all over the world - with a £3 Billion turnover and 9,000 employees.

Virgin Atlantic is considered by many to be one of the world's most innovative and formidable airlines, having won top business, consumer and trade awards. In his 12-year tenure as CEO, Virgin Atlantic pioneered a range of innovations setting new standards of service, which its competitors have subsequently tried to follow.

Steve Ridgway's early career saw him working as Sales Manager for Cavenham Foods and for a brief period was also a teacher. He then moved to Miami and worked for power boat builder Ted Toleman. Steve worked there for two years as Business Development Manager which had Virgin as one of its clients and built the Virgin Atlantic Challenger. From 1981-'85 Steve worked for Cougar Marine, during which time he was the Project Head and Chief Pilot on the two Virgin Atlantic Challengers, designing and developing the boats, which culminated in the successful recapturing the Blue Riband record for the fastest crossing of the North Atlantic.

Along with Chay Blyth, Steve then founded Epsilon, Business Development Consultancy in 1989, which led to the creation of the hugely successful British Steel Challenge and The BT Global Challenge Round the World Race in 1992-93 and 1996-97.

His 23-year career at Virgin Atlantic ended when he resigned in 2013 and commented "My time with Virgin Atlantic has been nothing short of an adventure. I've seen many great times and a few bad, and have always remained firm that we must offer something different to that of our competitors. Our staff, both on the ground and in the air, deliver a service that others could only hope to copy. I will be leaving the airline as it embarks on a new era of flying – and I am confident that it will continue to soar and enjoy success for many years to come".

Not one to shy from debate, Steve Ridgway is a leading industry voice and has constantly challenged the Government to evaluate its stance on UK aviation and airports. He fought hard to ensure Virgin Atlantic is the UK's second largest long haul carrier, but more importantly – a brand that people all over the world admire. He successfully steered the airline through major global aviation issues including the events of 9/11 and the volcanic ash cloud.

Since leaving Virgin Atlantic, Steve has pursued personal interests which includes the St Moritz Hotel in Cornwall, which he co-owns with his brother, and has taken up Advisory Board roles with Global Infrastructure Partners and Aim Altitude. He is also Chairman of a large Baltic Ferry operator between Germany and Denmark.

Steve Ridgway was awarded a CBE in the 2006 New Year Honours list. In 2017, he was appointed as the new Chair of the British Tourist Authority for a three year term.

From 2017-2020, Steve was Chairman of Britain's national tourism agency VisitBritain and was appointed Chairman of the British Tourist Authority.

Keynote Business Speaking
Steve Ridgway is one of today’s most engaging and sought-after business speakers. As former CEO of one of the world’s most innovative, contemporary and formidable brands, he consistently delivers insightful, challenging and entertaining keynote presentations.

He discusses the make-up and fabric of the Virgin brand and examines how the company has recovered in times of crisis with the many challenges that Virgin Atlantic has faced; from global incidents such as 9/11 and the Icelandic ash cloud to the very public UK lawsuit against British Airways in the 1990s. Steve examines Virgin’s core values and how he believes the brand not only survived, but has continued to grow exponentially against the odds, and puts this down to Virgin’s award-winning approach towards customer service, how it values and treats its employees and how it continues to innovate and exceed industry expectations.

After Dinner Speaking
In his insightful, humorous and candid after dinner speeches, Steve Ridgeway regales audiences with a wealth of anecdotes and stories garnered from a lifetime of exciting challenges and career appointments.

Whether it was working at Cougar Marine and captaining the two Virgin Challenger yachts in the Blue Riband Challenge across the North Atlantic or the many fascinating insights to working with, and for, the very unconventional Sir Richard Branson. There will be something for everyone.

Steve's industry knowledge and business acumen has ensured Virgin Atlantic remains a consumer favourite... he has been a close friend and confidant since the early days [of Virgin Atlantic]. He has been a hands-on, inspirational leader and has shaped the airline into the company it is today.

A big hit - he captured the tone of the event perfectly.

How to book Steve Ridgway CBE for your event