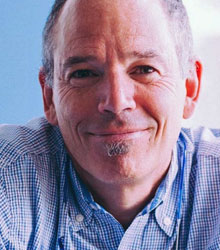 Marc Randolph is a veteran Silicon Valley tech entrepreneur, advisor, and angel business investor. He co-founded streaming channel Netflix, becoming its first CEO, and laying much of the groundwork for a service that’s grown to over 150 million subscribers; fundamentally altering how the world experiences media.

He’s founded or co-founded six other successful start-ups, mentored hundreds of early stage entrepreneurs, and as an investor has helped seed dozens of successful tech ventures (and just as many unsuccessful ones). More recently, he co-founded analytics software company Looker Data Sciences, which was subsequently sold to Google for $2.6B.

His first job in 1981 was for a music company in New York. Entrusted with the company's small mail-order operation, Marc taught himself direct mail and marketing techniques while toying with different ways to sell their catalogue of sheet music directly to consumers.

His fascination with computer software to track customer buying behaviour informed his decision to create a user interface at Netflix that doubled as a market research platform. He further developed theories about using direct mail to influence and retain customers while helping found the US version of MacUser magazine in 1984. While co-founding computer mail-order firms MacWarehouse and MicroWarehouse a year later, he made the connection between overnight delivery and improved customer retention.

The discovery later proved crucial to Netflix's growth and survival: the company's subscriber base blossomed and cut into Blockbuster’s revenues in cities where Netflix offered overnight delivery.

From 1998, Marc spent the dawn of the Internet age building direct-to-consumer marketing operations at software giant Borland International. He left in 1995 for a series of short stints at Silicon Valley start-ups where, in late 1996, a software debugging company acquired the small start-up where he was working.

The founder and CEO, Reed Hastings, retained Marc Randolph as vice president of corporate marketing. It was then acquired in an $850m stock swap in what was then the richest merger in Silicon Valley history. Hastings and Randolph commuted together for four months while the merger was finalised, and on these journeys, the idea for Netflix was born.

Marc wanted to replicate the e-commerce model pioneered by online bookseller Amazon.com. He'd heard that digital-versatile-discs (DVD) were being tested in several US markets, and wanted to explore the concept of selling the compact new digital format online.

He and Hastings couldn't find a DVD, so they tested the idea with a compact disc. Wondering if a CD could be mailed, they purchased a music CD and a greeting card then stuck the CD in the envelope and posted it to Reed's house. The next day it arrived, intact.

If ever there was an 'a-ha' moment, that was it.

Randolph named the company, designed the user interface and branding and acted as chief executive for the first year while Hastings completed Stanford University graduate school.

Netflix launched on April 14, 1998. Randolph had designed the user interface to act as an online catalogue of movies and a market research platform so that he could constantly test different versions to perfect the user experience.

The data generated by these market tests led the team to three concepts that they combined in 1999 to create Netflix's successful business model:
1. A subscription-based service with no due dates or late fees and unlimited access to content;
2. A 'queue' that allowed subscribers to specify the order in which DVDs should be mailed to them, and
3. A serialised delivery system that automatically mailed out a DVD as soon as the previous rental was returned.

The subscriber data collected by the user interface fed a recommendation engine known as Cinematch, that helped manage the company's limited DVD inventory by guiding subscribers to movies and TV shows that were in stock and generally away from new releases.

Randolph ceded the CEO post to Hastings in 1999 and turned to product development. He left Netflix in 2002 after helping guide the company through its IPO two years earlier. He credited Hastings with successfully scaling the company to 93 million subscribers worldwide.

His book, That Will Never Work: The Birth of Netflix and the Amazing Life of an Idea was published in September 2019.

Since his departure from Netflix, Randolph has served as a mentor to numerous start-ups. In addition to his mentorships, he is a keynote speaker, focusing on entrepreneurship, leadership, and innovation. He travels the world speaking about his experience with Netflix and the lessons he has learned from his other start-up investments.

Charismatic, approachable and hugely experienced, Marc Randolph is a globally sought-after keynote speaker at conferences, seminars and a wide range of corporate events.

He delivers inspirational presentations about business strategy, the entrepreneurial mindset, his journey to launching and growing Netflix, and providing real-world solid takeaways for how YOU can innovate and disrupt within YOUR industry.

With knowledge and experience that applies to any business or industry, Marc seamlessly translates his wisdom into meaningful acumen and inspiration to all types of audiences. He is comfortable addressing large industry events ranging from 10,000 seat auditoriums to smaller audiences of corporate CEOs around a boardroom table.

His experience as a company founder and entrepreneur gives him the authority to speak not only about the founding of companies, but how using innovation and turning ideas into reality results in success.

All of Marc’s talks are delivered with energy and wit, drawing on examples from his broad experience as an innovator, stories from the founding and growth of Netflix, and lessons learned while mentoring and investing in hundreds of early stage start-ups.

Where do Ideas Come from?
Anyone who has taken a shower has had an idea, but how do you turn those ideas into reality? Netflix Founder and start-up CEO Marc Randolph will share dozens of tips, tricks and stories drawn from his four decades as an entrepreneur that will help you more easily come up with innovative ideas, validate them, and get your new venture off the ground.

Equal parts inspiration, start-up stories, and practical tips, it’s a message that resonates equally well with students, early stage entrepreneurs, and any businessperson looking to bring innovation to their business.

How to get your company innovating and thinking like a start-up
The world is changing rapidly - and companies that can’t innovate effectively are going to be left behind. But while innovation is easy to aspire to, it’s hard to put into effect. Netflix founder and start-up CEO Marc Randolph will share dozens of effective tips, tricks and stories drawn from his four decades as an entrepreneur that will help you make your company more responsive to changing conditions - regardless of your company's size or industry.

Packed with dozens of stories that trace the dramatic ups and downs of those first exciting years, Marc weaves an inspiring story that shows the value of innovation, persistence and optimism. Along the way he shares some of the many values that he believe made Netflix successful, including a focus on analytics and testing, its novel corporate culture, and it’s almost fanatical obsession with focus.

Equal parts inspiration, start-up story, and practical tips, it’s a message that resonates well with anyone who appreciates a good “overcoming adversity” story.

Clients often ask about purchasing books for giveaways and delegate packs. Below you’ll find a selection of products by Marc Randolph. Click the images to view on Amazon's website. For bulk orders, please speak with your Booking Agent.

How to book Marc Randolph for your event