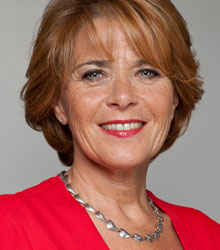 Lorraine Heggessey is a trailblazing business leader and renowned media figure with huge experience of broadcasting and production in both the private and public sectors.

Having taken on some of the most challenging roles in the industry, she was appointed as the first female Controller of BBC1 in 2000 and became the first female CEO of a major independent production company when she joined talkbackThames in 2005.

Under her leadership, Lorraine led the BBC to become the most popular in Britain, overtaking its main competitor, ITV1, for the first time. With an annual budget of £1billion, she revamped Saturday nights introducing flagship hit shows including Strictly Come Dancing and the new Dr Who.

Lorraine has an instinct for popular programming and has been directly associated with many of the biggest television hits of the past decade. She also brought additional dramas into the schedule many of which became long running series such as Spooks and Waking the Dead

She is an expert in talent management having worked closely with many star performers from Simon Cowell and Alan Sugar to Jonathan Ross and Rob Brydon.

Lorraine Heggessey has a reputation as a dynamic leader with a strong track record of spearheading radical change. At BBC1 she led a comprehensive shake up of the channel's schedule and branding.

At Talkback Thames, she used her creativity and talent management skills to drive commercial success. Taking over leadership of the company at a critical period, just as its founder and several key executives were leaving, she brought in a new team, revitalised the programming portfolio and increased profits by over 50 percent in her first two years.

Lorraine was responsible for around 800 hours of television a year, including the UK's two most popular shows, X Factor and Britain's Got Talent and other hits such as The Apprentice, Grand Designs and QI.

Under Lorraine's leadership, the company trebled its entertainment output, set up a digital division, launched dozens of new titles and won numerous Bafta and Royal Television Society awards. It was named Best Independent Production Company at the Broadcast Awards in 2009 and was chosen by freelancers as the place they would most like to work.

Lorraine Heggessey has always thrived on new challenges. Her early career was as a current affairs producer on 'Panorama' and 'This Week' where she filmed undercover in Brezhnev's Soviet Union, went to the Falklands straight after the war and was held under house arrest in Zaire. She is also known as the woman who turned the tables on reporter Roger Cook by door stepping him for a Channel 4 Documentary and secured the first ever television interview with notorious villain Mad Frankie Fraser for a series on the history of crime in Britain.

She was Woman of the Year at the Women in Film and Television Awards 2005. She has also won the Media Award at the Confederation of British Industry (CBI) First Woman Awards and the Bertelsmann Entrepreneur Award.

In 2012, in search of a new challenge, she secured private equity investment for her vision to build a new independent production group through a combination of acquisitions and backing start-ups. As Executive Chair, Lorraine led Boom Pictures through several deals in quick succession to build the 7th largest independent production company in Britain (worth c£100 million with offices worldwide). It was subsequently acquired by ITV in 2015 and renamed Two Four Group.

This included mental health - through the Heads Together campaign - and supporting wounded, sick and injured veterans.

Lorraine is a Fellow of the Royal Television Society, and a frequent judge for BAFTA. She is an external advisor to Channel 4’s Growth Fund, that was set up to invest in small to medium sized production companies, is Chair of the Grierson Trust, and is a regular contributor on media topics for the Today Programme and Newsnight.

Lorraine Heggessey is a sought-after keynote speaker, and her popular topics include:

• Managing and implementing change.
• Leadership – how to be an authentic inspirational leader.
• Intrapreneurship – bringing a freelance empowered mindset to the corporate environment.
• Women in business.
• Mental Health in the Workplace

How to book Lorraine Heggessey for your event