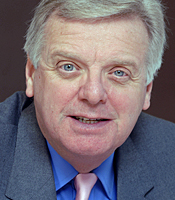 Michael Grade has a long and distinguished career in broadcasting, encompassing London Weekend Television, the BBC (as Controller of BBC-1) and over nine years as Chief Executive of Channel Four Television. In May 2004, he was appointed Chairman of the BBC, succeeding Gavyn Davies, resigning in November 2006 when his appointment as Executive Chairman of ITV was announced.

He stepped down from ITV at the end of 2009. Michael is non-executive Chairman of Pinewood and Shepperton Film Studios and also of Ocado, the on-line retail grocery arm of the supermarket, Waitrose. In February 2010 he became Chairman of the James Grant Group.

Michael Grade has presented many television programmes for the BBC, most recently BBC4's Goodbye from Television Centre. Documentaries include The World's Oldest Joke, The Story of Variety, History of the Pantomime Dame, and The Story of Music Hall. He also presented a series reflecting his own view of television for BBC Radio 2, Michael Grade: On the Box.

How to book Michael Grade for your event