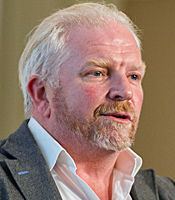 Ellis Watson is Executive Chairman and former CEO of DC Thomson, the Scottish media group. He previously headed Simon Cowell's joint venture with Sony, and turned around the legendary Greyhound Bus business.
Ellis' first break came as Marketing Director at The Sun, reporting directly to Rupert Murdoch. He then became CEO of Celador International, licensing Who Wants To Be A Millionaire? to 100 countries and overseeing 130 branded consumer products before being lured back to Fleet Street as MD of Mirror Group Newspapers.  After a spell with Menzies, Ellis Watson next accepted an invitation to join the board of FirstGroup, the world's biggest privately owned public transport operator. They parachuted him in to Ohio to address the ailing fortunes at Greyhound. Founded in 1914, it was a $3bn concern with 3,400 bus stations, 17,000 buses and 27,000 employees; but it was broken and losing share to internal airlines.

Within 14 months Ellis Watson had re-equipped the fleet, rejuvenated the brand and reinvented the culture (starting with mystery shoppers and training camps). Greyhound is now building a reputation for safety, reliability, comfort and above all service.

In his current role at DC Thomson, Ellis is steering a traditional firm that's been family run for six generations into a future-proofed organisation. He's shed a third of staff, increased turnover at the papers and moved The Beano, part of the fabric of the company, from print to digital.

In presentations, Ellis Watson argues that a significant external shock like a recession can be a springboard for positive change. He shows how to inspire passion when under pressure, and how to progress from mission statements to true company culture embracing quality, integrity and diversity.   Ellis Watson is known as one of the most inspiring and intelligent keynote speakers in Britain. He’s also hugely entertaining. After dinner he might reveal how he ran at his naked reflection in the mirror – mistaking himself for an intruder.

The key messages about working together and teamwork really came through.

Ellis was just what guests needed after a hard day of meetings. He was a perfect fit for the evening.

Ellis’ content and delivery was excellent and matched the brief brilliantly.

Truly outstanding. Not only is he hugely energetic and motivating, he is also one of the funniest speakers I have ever heard. I would book him again and again.

Everyone was very positive with feedback and Ellis 'woke' then all up after an intensive conference.

Ellis’s contribution was fabulous, very amusing. Ellis bought the post lunch lull back up. He met the objectives well, he bought insight to it and made comparisons with his own knowledge.

Many thanks Ellis... you were superb, and the feedback from audience and leadership team (from Chairman downwards) was brilliant, so thank you so much. Incredibly entertaining, and inspirational. I sincerely hope our paths do cross again, and rest assured I will be suggesting your kind services to other clients when I can.

Ellis was smashing – very positive opening to the conference. The energy in the room was great, not much blackberry checking at all!

How to book Ellis Watson for your event