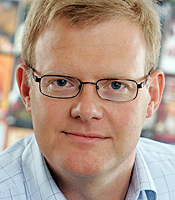 As CEO of LoveFiLM, Simon Calver oversaw more than 55% of the DVD rental market in the UK, and the shift away from a physical product to online streaming, before selling the company to Amazon for a reported £200m in 2011. With over 1.6 million subscribers in the UK, Germany and Scandinavia and an annual growth near 50%, the company was named growth company of the year in 2010 by the CBI/Real business and has also headed the Sunday Times Buyout Track of top 100 VC/PE backed UK businesses. Through a series of acquisitions, LoveFiLM quickly became the leading online DVD rental and streaming outlet in the UK and Europe. By the time Simon left the business, it had expanded its market tenfold.

In 2012 he was headhunted by the executive board to take the helm as CEO of Mothercare, in a bid to regenerate the company with his knowledge of brand expertise and e-commerce. Simon was charged with a strategic overhaul of the struggling retailer. The size, location, number and nature of its stores, the brand's online offerings, international markets, and its Early Learning Centre chain were all subject to his scrutiny. He implemented a three year plan to turn the business around, in the process closing around 100 stores and saving £13m a year.

Simon is a strong believer that sometimes borrowed ideas bring the greatest rewards. Covering marketing lessons from LoveFiLM, as a retail speaker Simon stresses the importance of initiating change in organisations to create the right culture of business that is so essential to success.

Prior to LOVEFiLM, Simon Calver was COO and President at Riverdeep, one of the fastest growing interactive digital education companies in the US. He was also GM and VP of Dell's UK and Ireland Home and Small Business Operation. Before that he was International VP of Sales Operations for PepsiCola, and GM and VP of PepsiCola UK where he launched Pepsi Max, Pepsi Blue and development of the Pepsi Music activity.

Simon Calver began his career as a graduate in Unilever and as a strategy consultant at Deloitte. He was a winner of Ernst & Young's Entrepreneur of the Year 2009 for London and the South East and was a 2010 finalist. He is a Companion of the Chartered Management Institute, a fellow of the IoD and a Fellow of the Royal Society of Arts.

Simon regularly speaks across the country on management, leadership and entrepreneurship and was a previous keynote speaker at the IoD National Congress at the Royal Albert Hall.

With a natural and pragmatic management style, in his speeches Simon Calver discusses the entrepreneurial, growth, strategic and marketing lessons from LoveFilm and his other business interests.

With vast knowledge and a wealth of experience, Simon is a highly sought-after and dynamic keynote conference speaker. Popular speech themes include:

Simon Calver was an excellent speaker and was a pleasure to work with. His session was rates as one of the best sessions at the event.

Simon Calver gave the opening keynote at The Economist's CIO Agenda - a high-level forum for senior IT leaders. We wanted to hear a CEO perspective on the IT challenges facing organisations today and in the future and Simon certainly delivered. He was the highest-rated speaker at the event, averaging a score of 8.04 out of 10, and his talk was dynamic and generated a lot of questions and discussion.

Simon Calver has spoken at a number of high profile Institute of Directors (IoD) events, to audiences of up to 2,500 senior business leaders. Simon has always delivered a strong message, which is full of practical learning's for the audience as well as personal insights and frank views on relevant issues. His feedback has always been very positive attendees and he has the unique ability as a speaker to both inspire and educate an audience. We would be delighted to have Simon speak at future IoD events.

Simon Calver has been a keynote speaker, and been an expert panelist, at a number of our major business and entrepreneurial events. He's been on the platform at the CBI/Real Business Entrepreneurs' Summit (twice); the Growing Business Awards; and at British Library, "Inspiring Entrepreneurs" events that I've chaired. Each time, he's been superb. Business speaking is an art, and Simon is a grand master. From cutting-edge business practice to personal leadership tips to marketing in a digital era, he brings the subjects to life and offers real detailed, practical insights, as well as humour and honesty. His combination of corporate and entrepreneurial experience is rare and valuable. He's a true practitioner; he's built businesses and brands, and brings all those rich experiences to his presentations. LoveFilm is a household name, and audiences want to hear about the secrets of its success. With younger audiences of aspiring business leaders, students etc, Simon is accessible , generous and engaging. He's able to tailor his messages to his audience and always get the tone just right.

How to book Simon Calver for your event