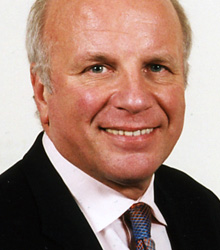 Greg Dyke is a media executive, broadcaster, journalist and, between 2013 and 2016, was Chairman of the Football Association. He was also Chancellor of the University of York from 2004 to 2015, and is currently the chairman of children's television company HiT Entertainment, and a panellist on Sky News' The Pledge.

Greg was educated at Hayes Grammar School and later at York University where he read Politics. After an early career as a journalist, he started his broadcasting career in 1977 at London Weekend Television. He became Editor-in-Chief of TV-am in 1983 and the following year Director of Programmes for TVS (Television South). He returned to LWT in 1987 as Director of Programmes; in 1990 he became Managing Director; and from 1991 to 1994 he was Group Chief Executive of LWT (Holdings) plc. After the Granada take-over of LWT, Greg Dyke joined Pearson Television as Chief Executive. During his time in the post, from 1995 to 1999, he built it into the largest non-US independent production company in the world.

He also guided the consortium which created Channel 5 and became its first Chairman. While at Pearson, Greg Dyke undertook a review of the Patients' Charter of the National Health Service at the request of the Secretary of State for Health. Since joining the BBC, Greg Dyke reorganised its structure with the twin aims of putting him closer to programme-makers and of spending more of the BBC's income on programmes and services for audiences and less on running the organisation.

He has also made major commitments to use digital technology to provide new education opportunities and to improve the cultural diversity of the workforce and BBC programmes.

Greg Dyke is outstanding business motivational speaker and conference speaker who is able to talk on a diverse range of subject matters and interests.

Clients often ask about purchasing books for giveaways and delegate packs. Below you’ll find a selection of products by Greg Dyke. Click the images to view on Amazon's website. For bulk orders, please speak with your Booking Agent.

How to book Greg Dyke for your event