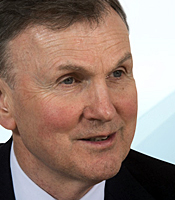 Archie started working for Citibank NA in 1975, then went on to become a partner at McKinsey & Co Plc in 1979. 1986 saw him move to the position of Group Finance Director of Kingfisher Plc. before making a well publicised impact on Asda as Chief Executive in 1991. It was here that he undertook one of the most high-profile turnrounds in British corporate history, and as a result became a household name.

Archie has had a large involvement in politics, starting with being elected Conservative Member of Parliament for Tunbridge Wells in May 1997. He was then appointed Vice-Chairman of the Conservative Party in June 1997, with special responsibility for the reform and renewal programme. In July 1998 he was appointed Chief Executive of the Conservative Party. In the reshuffle of June 1999, Mr Norman became Front Bench Spokesman for Foreign and Commonwealth Affairs, and was appointed Shadow Secretary for Environment Transport and Regions in February 2000. In 2001 he returned to the back benches and in May 2005 he stood down as MP.

Archie has also been a member of the Advisory Group on the Ingliston Development Trust of the Royal Highland and Agricultural Society of Scotland.

Archie Norman is now one of the most respected business leaders in the country, and is one of the most outstanding conference speakers on leadership, change and customer service.

How to book Archie Norman for your event