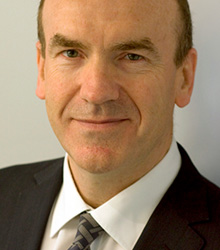 Sir Terry Leahy was CEO of Tesco from 1997-2011, the world's third-largest grocer, and is is one of the most admired business leaders in the world.

Terry Leahy was educated at St. Edward's College in the West Derby area of Liverpool before gaining a business science degree BSc (Hons) from Manchester University. After leaving university he worked for the Co-op for a year-and-a-half then quit to move to London. He first joined Tesco as a casual worker stacking shelves but soon joined the marketing department aged 23, in 1979. Before he turned 30 he had become Tesco's marketing director at a time when it was struggling to keep up with Sainsbury's.

From 1984 to 1986 Terry held the position of Marketing Director until he was appointed to Tesco's board of directors in 1992, and then Deputy Managing Director in February 1995. By the time he was 40 he had worked his way up to become Chief Executive Officer in March 1997. During his tenure he presided over the business returning to its roots of being a 'Value Retailer'. He introduced the Tesco Clubcard, one of the most success loyalty schemes and has seen the growth of non-food sales rise from less than 1% of the business to represent more than 5%.

The Tesco Internet grocery business has become recognised as the largest and most successful in the world. Tesco serve some 20 million customers per week and employ 220,000 staff making it the UK's largest grocery retailer.

In 2004, Sir Terry Leahy was named European Businessman of the Year by Fortune Magazine. Throughout his career he has eschewed the trappings of other successful businessmen - and happily admits he feels more at home discussing football in a Liverpool pub than among London's glitzy set. Management Today magazine said: 'Coming from Liverpool hasn't given him airs and graces - and it has equipped him to ignore them in others'.

He received a Knighthood for services to food retailing in the 2002 New Year Honours. Among other accolades he has received the Freedom of the City of Liverpool which entitles him to herd his sheep across the city without being arrested.

In his first book, “Management in Ten Words” (Random House, 2012), Sir Terry Leahy shares 10 essential management lessons that emerged from his intensive turnaround of Tesco. The book will help managers across the world understand what makes a company great and inspire them to move theirs forward.

Sir Terry Leahy is in high demand on the global speaking circuit, and his countless speeches on Leadership (Creating a Culture to Lead), Creative Marketing, and Leadership (Transparency and Growth) have garnered standing ovations and critical acclaim.

He stresses that effective leadership does matter in the success of an organisation and believes a truly effective leader is defined by what they influence others to achieve. He explains – and exemplifies – that a good leader takes individuals further than they would go on their own, and he directs managers to pass this idea along to their own employees, encouraging them to become leaders too.

Clients often ask about purchasing books for giveaways and delegate packs. Below you’ll find a selection of products by Sir Terry Leahy. Click the images to view on Amazon's website. For bulk orders, please speak with your Booking Agent.

How to book Sir Terry Leahy for your event

Founder and former CEO of Moonpig.com

Founder and former CEO of Moonpig.com