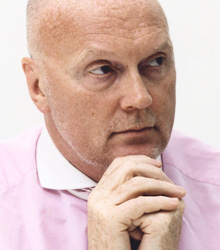 Allan Leighton began his career in 1974 as a salesman with Mars Confectionery and worked his way up through the ranks before leaving in 1991. He then joined Pedigree Petfoods, where he was Sales Director until his move in 1992 to ASDA Stores Limited.

Allan joined ASDA as Group Marketing Director, and was appointed Chief Executive four years later in September 1996. It was in this role that Allan was credited with turning around what he once described as a 'basket case' into a highly successful company. And in November 1999 Allan sold ASDA to American company Wal-Mart for £6.7 billion, he then became the President and CEO of Wal-Mart Europe.

After leaving Asda/Wal-Mart in November 2000, Allan developed a new work ethic - 'Going Plural' as he took on non-executive positions in a string of companies including lastminute.com, Leeds United, BHS, BSkyB and Selfridges.

In 2002 Allan Leighton joined Royal Mail as company Chairman and whilst in the post he drove a period of modernisation that has transformed Royal Mail from loss making into a profitable business. Allan stepped down from his role in March 2009 making him Royal Mail's longest serving Chairman.

Allan Leighton is an inspirational speaker and draws upon his wealth of experience to deliver a straight talking, highly captivating speech for any business audience. Topics covered are Leadership, Diversity, Strategy, Communication, Teamwork, Customer Service, Change Management and many more.

Allan Leighton is also a highly entertaining individual and is the perfect choice as a more informal after-dinner speaker, where hard-nosed business is cast aside in favour of his own personal journey including a wealth of anecdotes and stories.

Allan's witty, real-life anecdotes and ability to poke fun at the more formal elements of the business world make for a lively and engaging evening.

A superb communicator, inspirational and witty!

A straightforward approach to business removing any management jargon.

Clients often ask about purchasing books for giveaways and delegate packs. Below you’ll find a selection of products by Allan Leighton. Click the images to view on Amazon's website. For bulk orders, please speak with your Booking Agent.

How to book Allan Leighton for your event