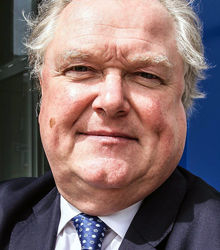 Digby Jones was born into business. Some of his earliest memories are of life in a busy corner shop where he lived with his parents and sister. He discovered the importance of good customer care at an early age and the concept of profit and loss, the very essence of good business management became an everyday reality for the young boy. And when, in the mid-sixties, the supermarkets began to move to the area, he also learned about the vulnerability of business.

Digby Jones spent the first 20 years of his professional career with Edge & Ellison, a Birmingham-based firm of lawyers, where he worked his way up from Articled Clerk to Senior Partner. During these years he was intimately involved in all aspects of business from running the firm “as a business” to recruiting and managing several hundred employees. It was here that he developed a vision of business and its role in society, and began to believe firmly in socially inclusive wealth creation.

In 2000 he joined the CBI and was able to put some of these ideas into action. He campaigned relentlessly on a range of issues including the move from traditional manufacturing of commodities to value-added, innovative products and services.

In 2005 he was knighted for his services to business and became Sir Digby Jones in the Queen's New Years Honours List.

When he left the CBI in 2006 Digby spent the next 12 months in the private sector as advisor to Deloitte and Barclays Capital, held a variety of non-executive board roles, and was the unpaid UK Skills Envoy. In this role he became outraged about the levels of adult illiteracy and innumeracy in the UK, and made the point that we cannot hope to have a safer and healthier society if people lack self-respect or aspiration.

In July 2007 he was appointed Minister of State for UK Trade & Investment and became a life peer. Forthright and, as ever, loyal to British business he spent the next 15 months “doing it in a different way”. He did not join the party of government and without the ambition to progress in politics he concentrated on the business of promoting Britain across the world, travelling to 31 countries in 45 overseas visits.

He advises in a number of other paid and unpaid roles, fulfilling his vision of promoting socially inclusive wealth creation. Lord Digby Jones travels regularly across the UK and overseas, runs his own business and his fulfilment is complete when Leicester Tigers and Aston Villa win their matches. He has many plans for the decades to come.

Lord Digby Jones is a highly accomplished international business speaker and orator with a capacity to communicate effectively to a wide range of audiences.
As one of the world's most acclaimed business commentators, Digby entertains and inspires audiences around the globe, with his memorable, bespoke presentations at conferences, seminars and dinners.

Highly original, Digby Jones has a wide range of corporate and public sector clients who value his original thinking and his ability to unify audiences with his captivating and unique personal style. Topics are adapted to suit clients’ individual needs and preferences embracing insightful and topical views on the world’s economies; the changing face of business in the 21st century; and closer to home the ongoing public versus private sector debates. His seminars on leadership and management are much in demand.

He has shared the stage with the world’s leading Statesmen and Stateswomen, spoken at Party Political Conferences, delivered keynote addresses at symposiums and conferences around the world as well as sharing his insight at seminars and business events for private and public sector organisations across the UK. Digby has provoked thought at lectures and combined the serious and the jovial for clients requiring a topical and dynamic element at their corporate dinners and lunches.

What can I say: I am a fan. You are informative, personable, entertaining and have a tremendous sense of humor. You captivated the audience here in New York. I received many compliments on your speech, your delivery and your charm.

Digby Jones did a superb job with regard to his presentation, as always, and I appreciated the way he involved himself with delegates afterwards. He made a major contribution to the success of the event.

Digby Jones is one of the most remarkable people I have ever come across. His commitment, his dedication and his enthusiasm are quite extraordinary. He is a great British patriot.

From early, cautionary tales about the impact that democratised markets in eastern Europe would have on the motor industry in his beloved West Midlands, to his warnings that India and China would 'have your lunch and your dinner', Digby Jones is a trend spotter to keep Governments and commentators on their toes.

Clients often ask about purchasing books for giveaways and delegate packs. Below you’ll find a selection of products by Lord Digby Jones. Click the images to view on Amazon's website. For bulk orders, please speak with your Booking Agent.

How to book Lord Digby Jones for your event