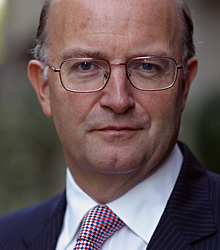 Roger Bootle is one of the City of London’s most distinguished and best-known economists. Founder of Capital Economics, Roger is also a Specialist Adviser to the House of Commons Treasury Committee and an Honorary Fellow of the Institute of Actuaries.

He was formerly Group Chief Economist of HSBC (1989-1998) and during the John Major Conservative government, he was appointed one of the Chancellor’s panel of Independent Economic Advisers, the so-called ‘Wise Men’. In 2012, he won the £250,000 Wolfson Prize, the second biggest prize in Economics after the Nobel, for his study on how a country would leave the Eurozone.

Roger Bootle studied at Oxford University and began his academic career as a Lecturer in Economics at St Anne’s College, Oxford. Most of his subsequent career has been spent in the City of London.

Roger has written many articles and several books on monetary economics. His latest book, “The Trouble with Europe” analyses what has gone wrong with the EU and what needs to be done to put it right. This follows “The Trouble with Markets”, which analyses the deep causes of the recent financial crisis and discusses the threats to capitalism arising from it.

Like his previous book, Money for Nothing, which correctly anticipated the financial crisis, it has been widely acclaimed. This followed the success of The Death of Inflation, published in 1996, which became a best-seller and was subsequently translated into nine languages. Roger Bootle is also joint author of the book Theory of Money, and author of Index-Linked Gilts.

His latest book, The AI Economy: Work, Wealth and Welfare in the Robot Age, was published in September 2019. Extraordinary innovations in technology promise to transform the world, but how realistic is the claim that AI will change our lives?

In this book, Roger responds to the fascinating economic questions posed by the age of the robot, steering a path away from tech jargon and alarmism towards a rational explanation of the ways in which the AI revolution will affect us all. Tackling the implications of Artificial Intelligence on growth, productivity, inflation and the distribution of wealth and power, THE AI ECONOMY also examines coming changes to the the way we educate, work and spend our leisure time.

Roger Bootle appears frequently in the media providing commentary on the economy and is also a columnist for The Daily Telegraph. In The Comment Awards 2012 he was named Economics Commentator of the year. Roger is a much sought after keynote speaker at conferences and business events around the world.

He has a long and impressive record of successful forecasting of major events and market movements, often in contrast to the prevailing orthodoxy of the time, including:

• Perceiving that before the Great Recession real estate markets were caught up in a bubble.
• Foreseeing the serious impact of the credit crunch.
• Forecasting the collapse of the dotcom boom.
• Seeing that the UK would be forced out of the ERM in 1992 and, in contrast to the official Treasury line and most forecasters, predicting that inflation and interest rates would fall.
• Forecasting that rising inflation would prompt UK interest rates to be raised to 15% in 1989.
• Realising that during the “hard monetarist” phase in 1979-81, inflation was going to fall sharply despite the fact the broad money supply was growing rapidly.
• And most famously, predicting as early as October 1990, that the financial climate in Europe and North America would be transformed by sustained low inflation – and maintaining this view even though many people in the market dismissed “The Death of Inflation” as a joke.

Roger Bootle is a renowned speaker at conferences and business gatherings around the world. He is equally effective at making a formal keynote presentation to an audience of thousands as he is giving an after dinner talk to a handful of senior executives.

Roger’s talks are distinguished by their unusual combination of insight, wit and directness. His most popular speech topics include:

Roger Bootle was absolutely fantastic, his presentation was inspiring, very interesting and he managed to present it in a very entertaining way.

Scores for content and presentation both a maximum 5/5. (Convention average 3.8/5 and 3.7/5 respectively.)

Roger Bootle was very well received, highly knowledgeable and his presentation excellent. He gave the audience exactly what they needed.

Roger Bootle provided the Euro-scpetic viewpoint with convincing arguments. The panel would not have been a success without his presence.

An excellent speaker with just one major problem - he has set a high standard for our next speaker to follow!

Clients often ask about purchasing books for giveaways and delegate packs. Below you’ll find a selection of products by Roger Bootle. Click the images to view on Amazon's website. For bulk orders, please speak with your Booking Agent.

How to book Roger Bootle for your event