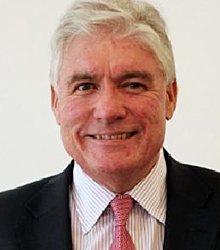 Professor Douglas McWilliams is one of the world's leading economists and a former adviser to David Cameron's Government. He is founder and President of the Centre for Economic Business Research (CEBR), one of the UK's leading specialist economics consultancies which, for over 25 years, has supplied independent economic forecasting and analysis to hundreds of private firms and public organisations.

Specialising in economic forecasting and analysis, with specialist knowledge of key industrial sectors including road and rail transport, retailing, cars, vans, trucks, property, construction, plastics and information technology, Douglas is famed for his communications skills and is one of the most widely quoted economists in Europe.

Douglas McWilliams currently advises 25 of the FTSE companies, most of the UK's top retailers, four out of the UK's top ten legal firms and some of the leading firms of accountants, as well as being the economic adviser to the Institute of Chartered Accountants in England and Wales (ICAEW).

He was also Chief Economic Adviser to the Confederation of British Industry from 1988-1992, IBM UK Chief Economist, Manager of Market Research, Manager of Business Environment Analysis and Chairman of the economics forecasting group of UNICE.

Following the world financial crisis, in 2012 Douglas McWilliams was chosen from over 300 applicants to become the Gresham Professor of Commerce. His lecture series 'The world's greatest ever economic event', looking at the impact of globalisation on the Western economies, attracted widespread attention and large audiences.

Besides forecasting, his interests have ranged widely – from being the first to apply option pricing theory to the economics of safety, to new approaches to economic impact assessment for transport which have now been incorporated in the official Department for Transport guidance.

Douglas McWilliams is Visiting Professor at Kingston University Business School, and a member of the Councils of the Foundation for Manufacturing and Industry and of the Institute for Fiscal Studies. He is also Economic Adviser to the Chartered Institute of Marketing.

He holds an MA in philosophy, politics and economics, and MPhil in economics, from the University of Oxford.

Professor Douglas McWilliams is a well known keynote speaker of many years' standing. Because of his forecasting track record, he is greatly in demand for public speaking engagements and media appearances.

McWilliams' face is a familiar one to viewers of current affairs and business television programmes such as Newsnight and Business Breakfast while his voice is heard frequently on the BBC and other radio programmes.

Douglas has a unique talent for being able to put across complex economic facts and forecasts in terms that can be understood by non-specialists. His great sense of humour can be detected in his speeches, which are interesting as well as informative.

His presentations are clear, concise, well-argued and supported by clear visual material.

Douglas McWilliams has given keynote speeches to a wide range of audiences, from seminars for packaging to seminars for property, from insurance to information technology, from catering to construction and including a whole host of diverse interests.

Very interesting and thought provoking topic which stimulated a lot of discussion. Chief Executives were very impressed with the content of the presentation.

Douglas McWilliams communicated in straightforward language the extraordinary challenges that lie ahead.

Clients often ask about purchasing books for giveaways and delegate packs. Below you’ll find a selection of products by Professor Douglas McWilliams. Click the images to view on Amazon's website. For bulk orders, please speak with your Booking Agent.

How to book Professor Douglas McWilliams for your event

To book Professor Douglas McWilliams, please submit an online enquiry, email bookings@nmp.co.uk or speak with one of our booking agents on +44 (0)1372 361 004.