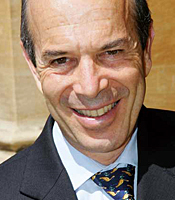 Professor Ian Goldin was the founding Director of the Oxford Martin School, University of Oxford, which aims to provide solutions to some of the great challenges of our time.

The School covers the frontiers of physical, medical and biological science as well as climate change and environmental science, the social sciences and the humanities.

Professor Goldin was Vice President of the World Bank (2003-2006) and prior to that the Bank's Director of Development Policy (2001-2003). He served on the Bank's senior management team, and was directly responsible for its relationship with the UK and all other European, North American and developed countries. Goldin led the Bank's collaboration with the United Nations and other partners. As Director of Development Policy, Goldin played a pivotal role in the research and strategy agenda of the Bank.

From 1996 to 2001 he was Chief Executive and Managing Director of the Development Bank of Southern Africa and served as an adviser to President Nelson Mandela. He succeeded in transforming the Bank to become the leading agent of development in the 14 countries of Southern Africa. During this period, Goldin served on several Government committees and Boards, and was Finance Director for South Africa's Olympic Bid.

Previously, Ian Goldin was Principal Economist at the European Bank for Reconstruction and Development (EBRD) in London, and Program Director at the OECD Development Centre in Paris, where he directed the Programs on Trade, Environment and Sustainable Development.

Professor Ian Goldin has received wide recognition for his contributions to development and research, including having been knighted by the French Government and nominated Global Leader of Tomorrow by the World Economic Forum.

He has published over 50 articles and 12 books, the two most well-known being "Globalisation for Development: Trade, Finance, Aid, Migration and Ideas" (Palgrave Macmillan, reprinted 2007) and "The Economics of Sustainable Development" (CUP, 1995). In addition to being Director of the School, Goldin holds a Professorial Fellowship at Balliol College, Oxford.

Professor Ian Goldin is an outstanding speaker on global future trends in technology, science, climate change, demography and other factors that will have an impact on corporations and government.

Clients often ask about purchasing books for giveaways and delegate packs. Below you’ll find a selection of products by Professor Ian Goldin. Click the images to view on Amazon's website. For bulk orders, please speak with your Booking Agent.

How to book Professor Ian Goldin for your event