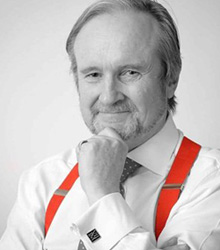 Justin Urquhart-Stewart was the co-founder of 7 Investment Management in 2001, building it up to £15 billion funds under management before his retirement in 2019. He is the chairman and co-founder of Regionally, innovating new investment services to the regions. Previously, he founded Broker Services, which became Barclays Stockbrokers and was a co-founder of what was to become the AIM market, as well as setting up the investment education specialist Proshare.

Justin started his career in Barclays DCO and was posted to Uganda, where he was seriously wounded in an incident that nearly put an end to his career, before a corporate banking role in Singapore. He was awarded an honourary doctorate by Southampton University, which also created the Justin Urquhart-Stewart bursary, an award available to second year business students. In 2016, he helped to launch Investors in the Community.

In his earlier career, Justin worked in the vineyards of France and the dockyards of Southampton, where he became a shop steward for UCATT. He is a keen archaeologist and motorcyclist and has one daughter, Tiwisanti. He lives in west London with three Burmese cats.

Justin Urquhart Stewart is highly sought after on the keynote and after dinner speaking circuits to both the financial services industry and outsiders.

How to book Justin Urquhart Stewart for your event

To book Justin Urquhart Stewart, please submit an online enquiry, email bookings@nmp.co.uk or speak with one of our booking agents on +44 (0)1372 361 004.