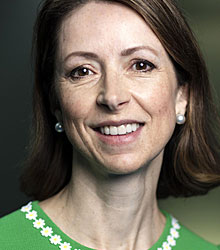 Dame Helena Morrissey is well-known for her work on gender equality, and in 2010 she founded the 30% Club, a campaign for more gender-balanced boards. Since then, the representation of women on FTSE100 boards has risen from 12.5% to 28.9% and there are now ten 30% Clubs throughout the world.

A financier, campaigner, author and the mother of nine, she is an inspirational leader who achieves results – in business, diversity, family life and encouraging others to succeed. She chairs Business in the Community’s Gender Equality campaign, which has recently canvassed the views of working fathers through its Equal Lives survey.

Helena started her City career with asset management firm Schroder’s in New York; when she returned to London she found herself the only woman in a team of 16 fund managers and missed out on a promotion because there was some ‘doubt over her commitment with a baby’.

The experience strengthened her resolve to take control of her own career, to provide for her family and to help other women. She joined Newton Investment Management and was mentored by its founder, Stewart Newton, who taught her the power of true diversity of thought. Seven years later she was appointed the firm’s CEO: over the next 15 years, profits more than trebled and assets grew from £20bn to £50bn.

Helena launched the 30% Club in 2010 to improve the gender balance on UK corporate boards, championed by the chairmen of those boards. Nine years later women represent over 30% FTSE350 directors, up from less than ten percent.

The UK is the only country to have achieved such progress without legislation. There are now fourteen 30% Clubs throughout the world and the initiative has broadened to help with all career stages from schoolroom to boardroom. It includes world’s largest cross-company mentoring scheme.

In 2017, Helena joined Legal and General Investment Management, leading a new drive to engage the nation to invest more, with a particular focus on improving women’s financial well being.

Helena has been named one of Fortune magazine’s World’s 50 Greatest Leaders and the Financial Times’ 2017 ‘Person of the Year’. She was appointed a Dame in the Queen’s 2017 Birthday Honours list.

Helena is a Philosophy graduate. Her husband Richard is a stay-at-home father to their children, aged from 10 to 27. Her first book A Good Time to be a Girl, Don’t Lean In, Change the System was published by William Collins in February 2018.

At the top of her game, in 2019 Helena was interviewed to be the next governor of the Bank of England, the first woman to be considered for the top job in its 325-year history. Around the same time she also joined St James’s Place as their new non-executive director.

In 2021, she was announced as Chair-designate of FTSE250 company AJ Bell and her book Style and Substance: A Guide For Women Who Want To Win At Work was published by Little, Brown.

She is a highly sought-after keynote speaker, offering an exciting vision and practical solutions for both companies and diverse talent.

Dame Helena Morrissey is a most accomplished public speaker, able to offer her uniquely dynamic perspective on practical solutions to the myriad conundrums facing companies in today’s ever-changing commercial landscape.

A campaigner for corporate change, equal opportunity, under-represented groups and green finance. Helena also offers her specialist take on what gender equality means for men. Having raised a family of nine children, she also addresses the issue of maintaining the balance between having a career and home life.

Helena is not afraid to tackle tricky issues head-on and frequently appears in the press to talk about the widening gender pay gap, and general resentment from business professionals who are inclined to dismiss the pursuit of diversity as political correctness.

Helena's stage presence encapsulated our audience, whilst engaging them with her story, and making them feel that she was one of them. Empowering, real, and a great story teller. Women in Data were thrilled to have Helena contribute at our event on the empowerment stage and would not hesitate to invite her back again to hear more.

Helena is an inspirational speaker. She delivers her message with clarity and passion in a way that really resonates. Even when discussing complex and challenging issues, her story telling skills and practical advice make it accessible and engaging. When she spoke before an internal EY audience of over 1000 people she held the room in the palm of her hand. Her open and honest style had an impact on the crowd that was palpable on the day and the feedback from the audience was overwhelmingly positive.

WINN UK had the privilege of welcoming Dame Helena Morrissey as our keynote speaker for the WINN UK annual event 2019 yesterday (20 November). Helena spoke passionately on the topic of “Why finance needs more women”. A wide audience of women and men from Natixis London Branch and other UK affiliates, as well as external guests, were inspired by the event. We look forward to continuing the positive and effective work WiNN does into 2020 and beyond.

There was a great buzz, fantastic attendance, Dame Helena was a winner!

Clients often ask about purchasing books for giveaways and delegate packs. Below you’ll find a selection of products by Dame Helena Morrissey DBE. Click the images to view on Amazon's website. For bulk orders, please speak with your Booking Agent.

How to book Dame Helena Morrissey DBE for your event