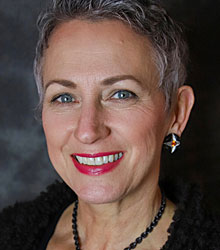 Dame Inga Beale was, until recently, the (first) CEO of Lloyd’s of London – the 330-year-old insurance and reinsurance market. With over three decades of global experience in financial services she was awarded a damehood in 2017 for services to the UK economy and for her contributions to driving the inclusion agenda for women and the LGBT community. She is also a workplace equality advocate.

During Dame Inga’s five-year tenure at Lloyd’s, from 2014-2018, she modernised the insurance market with the introduction of technology and, through various other initiatives, challenged the traditional “old boys club” culture to make it a much more inclusive environment for all.

As a bisexual woman, Inga was instrumental in the launch of Pride@Lloyds, an internal LGBT employee resource group, and has supported the LGBT Insurance Network. She also helped start the international Insurance Supper Club for leading female executives.

Having studied economics and accounting at Newbury College, Berkshire, Inga Beale began her career at the Prudential Assurance Company in 1982 training as an underwriter and specialising in international treaty reinsurance. The industry was composed predominantly of men at the time; she once took issue with posters in the office depicting half-naked women, only to have her colleagues plaster them across her computer and chair.

Prior to joining Lloyd’s as the Chief Executive Officer in 2014, she was Group Chief Executive Officer at Canopius, a prominent Lloyd’s managing agent, from 2012 – 2013. Inga joined Zurich Insurance Group in 2008 as a member of the Group Management Board in Zurich with responsibility for Mergers & Acquisitions, Organisational Transformation and Internal Consulting, before becoming Global Chief Underwriting Officer in 2009.

In 2006, Inga was appointed Group Chief Executive Officer of Converium in Switzerland (now part of the SCOR Group) after 14 years at GE Insurance Solutions. Inga Beale held various underwriting management roles at GE and gaining experience across London, the US, and France, before becoming President of GE Frankona and Head of Continental Europe, Middle East and Africa for GE Insurance Solutions based in Germany.

In 2015, she became the first woman and the first openly bisexual person to be named number one in the OUTstanding & FT Leading LGBT executive power list. Inga is also is the Chair of the HIV Commission established by UK AIDS charities the Terrence Higgins Trust and National AIDS Trust.

Highly respected for leading the global insurance market through a dramatic period of modernisation and embedding a culture of innovation and inclusion during her five-year tenure at Lloyd’s of London, Dame Inga Beale is a sought after and inspiring keynote speaker.

As the first female CEO of Lloyd’s, Inga played a key role in changing cultural perceptions and under her leadership, Lloyd’s launched a number of diversity initiatives, including the Dive In Festival, which grew to become the only world-wide insurance industry diversity and inclusion event.

She addresses global audiences of all shapes and sizes on topics including leadership, diversity and inclusion, LGBT, resilience and risk management. She is also a very popular speaker for International Women’s Day.

Creating an Inclusive Workplace
Breaking through several glass ceilings and addressing taboo topics, Inga talks from experience about how to build an environment where people from all walks of life feel valued and can thrive at work.

Driven by her personal purpose to empower women in business, and a varied career that took her to many different countries, she shares lessons learned along the way and discusses what firms can do to create their own inclusive workplace.

Modernising Tradition – A Journey of Cultural And Technological Change
Lloyd’s of London: a British institution with its roots in marine insurance was founded in 1688. Some of its practices hadn’t changed over hundreds of years but it needed to modernise to keep up in today’s technological world.

As the CEO hired to do this massive transformation, Inga tells her story of the cultural and technological changes required to bring this great institution into the modern age, and she shares tips and tricks for driving a successful transformation for any business.

Changing Risk Landscape
Across the world; society, business and governments are confronted with enormous change and challenges, all of which present risks – both new and old.

As Boards grapple with the threat of the climate crisis on their business, the rise of cybercrime exposing their vulnerabilities, or how to form strategies in the current climate of geopolitical change, Inga uses her experience in the insurance sector to highlight the latest risk trends and proposals on how to address them.

How to book Dame Inga Beale DBE for your event