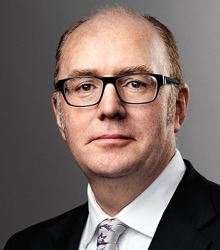 Dr Gerard Lyons is Chief Economic Strategist at Netwealth Investments, and a regularly quoted and respected economic forecaster of the global economy. In his role, Gerard leads the firm in the identification of future trends and macro-risk arising from shifts in economic, political and regulatory policy.

Gerard was formerly Chief Economic Adviser to Boris Johnson, the Mayor of London (2013-16), with a remit to provide the Mayor with strategic advice and intelligence on the economic outlook for London and the global economy. Prior to that he was Chief Economist and Group Head of Global Research at Standard Chartered, a position he held for 13 years in addition to a number of other senior roles within the bank.

A leading global economist widely respected for his understanding of macro economic trends and the accuracy of his forecasting, in August 2008 he was one of only two UK economists then predicting an imminent deep recession, forecasting a GDP fall of 1.6 per cent versus a consensus rise of 0.9 per cent. He was ranked number one forecaster globally by Bloomberg (out of over 360) in 2010 and 2011 and regularly tops the Sunday Times annual forecasting table. In December 2011, against the consensus, he predicted both the UK and euro area would both be in recession during 2013.

He was one of the co-founders for ‘Economists for Brexit’ and played a large role in supporting the referendum, making him well-placed to discuss the complex economic issues that surround the future of the UK outside of the European Union.

Gerard Lyons has a particular expertise on China. In 2011 he served as a Member of the European Commission “informal network of leading China experts” and he is current vice-chair of the 48 Group Club, encouraging UK-China business ties. He is also Chief Economic Advisor at Netwealth, an investment service which is part of a new breed of algorithm based investment tools revolutionising the wealth management industry.

Gerard’s first book, “The Consolations of Economics” (Faber & Faber), was published in 2014. The book combines economics, finance, geopolitics, policy and risk, and explains the underlying drivers of our economic outlook, and why we should be positive.

An exceptionally intelligent and articulate keynote speaker, with vast experience and specialist knowledge on international financial affairs, Dr Gerard Lyons is the ideal choice to advise on current economic affairs and future trends on a macro level.

Clients often ask about purchasing books for giveaways and delegate packs. Below you’ll find a selection of products by Dr Gerard Lyons. Click the images to view on Amazon's website. For bulk orders, please speak with your Booking Agent.

How to book Dr Gerard Lyons for your event