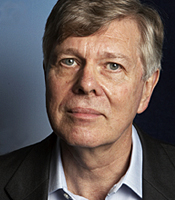 Mike Harris has become world famous for his ability to create billion pound iconic brands. Three in fact; Firstdirect, Mercury Communications and Egg plc. And until it's sale to Experian in December 2011, he was also the co-founder and Chairman of semantic digital identity company Garlik. Garlik is the only company in the world to have the inventor of the World Wide Web, Tim Berners-Lee, on its advisory board. Mike is now focusing on running workshops and mentoring programmes for small businesses with high growth potential and for entrepreneurs and innovators with big ideas.

Mike Harris spent the first 15 years of his career in IT at Midland Bank PLC (now HSBC). Having left Midland Bank in 1986 to join technology company Space-Time Systems he returned in 1988 and led the development and launch of Firstdirect – a Midland Bank subsidiary which was the world's first major telephone bank. It was launched in 1989 with Harris as CEO.

In September 1991 he became CEO of Mercury Communications (the first competitor to British Telecom in the UK) and Chairman of Mercury One to One. Mercury Communications was the first Telco in the world to provide integrated competition to an established former monopoly. During Harris's tenure Mercury's turnover grew from £1bn to over £1.6bn and a consumer brand was established with over 4m customers. The Mercury Consumer business was placed in a 51:49 JV with Bell Cable Media in 1997 and the JV sold to NTL for $10bn in 2000 and later went on to become Virgin Media.

In 1995 Mike Harris moved to the position of founding CEO of Prudential Banking plc and then the CEO of its successor, Egg - the first major player in internet banking in the UK and for several years the largest internet bank in the world. Egg went from start up to a billion pound public company in 2 years when it floated on the London Stock Exchange in July 2000 at a value of £1.3bn. Mike retired as CEO of Egg in 2001 but continued to serve on the Board as Vice Chairman until 2005. Egg was sold to Citi Group in 2007 for $1.2bn

Mike was a regular speaker at the mid career MBA course at MIT from 1996 to 2008 and has also been Chair of Innovation at Royal Bank of Scotland from 2005 until March 2009, where he supervised the establishment of a group wide innovation programme.

With his dynamic, interactive and informative sessions, Mike Harris not only motivates his audiences, he provides them with a wealth of practical approaches, real-life examples and stories as well as hands-on techniques, all of which can be immediately applied to the audiences own personal and professional development.

Mike Harris' keynote speeches are designed to generate exceptional results - results well beyond those that could be expected from conventional sources.

Clients often ask about purchasing books for giveaways and delegate packs. Below you’ll find a selection of products by Mike Harris. Click the images to view on Amazon's website. For bulk orders, please speak with your Booking Agent.

How to book Mike Harris for your event