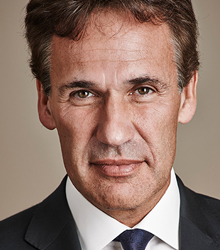 Professor Richard Susskind OBE is an author, keynote speaker and independent adviser to major professional firms and to national governments. His main area of expertise is the future of professional service and, in particular, the way in which the IT and the Internet are changing the work of lawyers.

He has specialised in the impact of information technology on the law for over 30 years.

As IT adviser to the Lord Chief Justice, he advised Lord Bingham from 1998 to 2000, Lord Woolf from 2000 to 2005, Lord Phillips 2005 to 2008, and Lord Judge, since October 2008. In this capacity, he works closely with senior judges in England and Wales in helping them identify and articulate the most promising applications of IT for the Judiciary.

Richard has worked on legal technology for over 30 years, lectures internationally and has been invited to speak in over 40 countries and has addressed audiences numbering more than 250,000.

In 2003, he was appointed by the Cabinet Office as Chair of the Advisory Panel on Public Sector Information, a position he held until 2008. Richard is President of the Society for Computers and Law and is Chair of the Advisory Board of the Oxford Internet Institute where he is also a Visiting Professor. He also hold professorships at UCL, Gresham College, London, and the University of Strathclyde in Glasgow.

He has also written and edited numerous books, including Expert Systems in Law (OUP, 1987), The Future of Law (OUP, 1996), Transforming the Law (OUP, 2000), The Susskind Interviews: Legal Experts in Changing Times (Sweet & Maxwell, 2005), The End of Lawyers? Rethinking the Nature of Legal Services (OUP, 2008), Tomorrow's Lawyers (2013), and has written around 150 columns for The Times. His work has been translated into 10 languages.

His passion is the modernisation of the practice of law and the administration of justice. His belief that the professions and justice systems should be modernised underpins most of his activities as an advisor and commentator.

Richard’s work is not confined to the academic world and to advising in the public sector. He consults widely in the private sector, to major law firms and to large in-house legal departments. He has been an active member of an advisory board of Lyceum Capital, a private equity firm that is committed to investing in the legal profession; and he was chairman of the advisory board of Integreon, a legal and business process out sourcing business.

Richard has a first class honours degree in law from the University of Glasgow and a doctorate in law and computers from Balliol College, Oxford. He is a Fellow of the Royal Society of Edinburgh and of the British Computer Society, and was awarded an OBE in the Millennium New Year's Honours List for services to IT in the Law and to the Administration of Justice.

Richard Susskind delivers in depth and thought provoking keynote presentations and consultancy to top managers in the private and public sectors, helping them to think clearly and make decisions confidently about the future, and to plan for the long term within their organisations.

As an independent expert and thought leader, Richard brings fresh insight and acts as a catalyst in helping companies and organisations drive forward their long term planning and implementation. He challenges in a way that is hard to do from the inside as a partner or employee.

Keynote Speaking
Richard Susskind delivers keynote speeches at about 100 conferences, seminars, retreats or other events every year and has been invited to lecture in more than 40 countries around the world.

He has addressed audiences (in person and virtually online), numbering more than 250,000. He has organised various international conferences, is a regular conference chairman and gives numerous major keynote addresses each year. When unable to attend in person, Richard regularly delivers his talks virtually streamed live, via pre-recorded video, or as a multimedia e-learning presentation.

He is also frequently invited to act as a facilitator and chairman of meetings. Richard’s speaking subjects include the future of law and legal services, the future of professional service, trends in IT and the Internet, strategy and business planning, the future of government, the future of education, IT strategy for major organisations, knowledge management, and e-business.

Consultancy
Richard Susskind works with top managers, in the private and public sectors, in helping them to think clearly and make decisions confidently about the future, and to plan for the long term within their organisations.

As an independent expert and thought leader, Richard Susskind brings fresh insight to clients, and acts as a catalyst in helping them drive forward their long term planning and implementation. He challenges in a way that is hard to do from the inside as a partner or employee. He advises his clients in a variety of ways.

The following list indicates the various ways in which Richard helps his clients. Richard Susskind acts as:

• An adviser on likely and possible trends in the legal market, using a mix of his own ideas and techniques such as ‘blank-sheet thinking’;
• A sounding board (a coach of sorts) for those who run firms and practices within firms, helping them to focus on future trends and plans;
• A speaker at internal conferences, away-days, leadership training events, and training sessions generally; a researcher who undertakes studies of the views of clients.

We had really great feedback, in particular everyone commented on how Richard was an excellent speaker and the subject matter really engaged our attendees.

Clients often ask about purchasing books for giveaways and delegate packs. Below you’ll find a selection of products by Richard Susskind OBE. Click the images to view on Amazon's website. For bulk orders, please speak with your Booking Agent.

How to book Richard Susskind OBE for your event