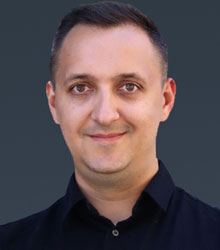 James Poulter is the former Head of Lego Group’s Emerging Platform team and a leading thought leader and keynote speaker on the future of work, voice technology, conversational artificial intelligence, and social media.

James is an experienced marketer and communications professional with over 10 years of experience. When Head of The Lego Group’s Emerging Platforms & Partnerships team as part of the Digital Consumer Engagement division, James pursued new technologies, platforms, and partners to build digital consumer engagement with Lego customers, shoppers and consumers on a global basis.

He devised and developed social features such as Lego Life’s emoji keyboard, custom characters, and moderation system. James also oversaw the launch of Lego’s global partnership with Giphy leading the Lego channel to accrue over 1 Billion GIF views in its first year.

Prior to joining Lego, James worked for a number of the world’s leading marketing, advertising and public relations firms including Edelman and Ogilvy leading digital marketing, mobile and social campaigns both in EMEA and globally as well as new business efforts for clients such as Diageo, Unilever, Bose, PayPal, HP and Adobe.

In December 2018 he launched Vixen Labs – which is a company that specialises in Voice User Experience (VUX) which includes design and strategy – helping companies to embody their brand and give their customers greater experiences.

James believes that Voice-First interfaces and Conversational Artificial Intelligence have the power to make the way we experience the internet and the content on it more human, empathetic and healthier for everyone. In his speeches he explains how voice is a becoming the anecdote to our digital obsessions.

Away from work James is an advisor to the Church of England’s digital board is also the host of the show “Signal” for The MediaNet which explores on a monthly basis the intersection between faith, media, and technology.

Welcome To The MeetingVerse - How Web 3.0 is coming to eat the boardroom. In this session we will look at the ever growing "metaverse" and help delegates understand what it is, and crucially, what it isn't. Giving insights into how Web 3.0 Technology is going to change the way we work, meet, learn and develop and the expectations of the next generation of workers. As we emerge from the pandemic we will look at the impacts that COVID has had on our ways of working and where technology like AR, VR, NFTs and Voice tech could change our workplaces in the future.

CTL – ALT- DEL - The Digital Revolution has already changed the way we work and communicate with our clients, but the future of the workplace has faced further challenges with the impact of COVID-19. In this presentation James Poulter looks at how you can continue to build a culture of innovation and what will need to change in order for companies to evolve to the new ways of working. Using some real-life examples from his time at Lego, Edelman and Ogilvy, James looks at what new controls (CTL) will need to be in place to allow a return to work. What will need to be altered (ALT) to allow your team to innovate, work together and still maybe work from home with a new work/life balance -  and what will need to deleted (DEL) from previous ways of working. There is no choice now to innovate – innovate is essential to survive.

The Voice Revolution & AI – In this presentation James talks on the impact of voice technology and how it is becoming the anecdote to our digital distraction and impact it will have and can have in the future.

The Future in 2025 – In this presentation James takes you into the not too distant future to look at the real impact of new and advancing existing technologies and how they will impact individuals lives in a 24 hour period and what long term benefits they will bring.

How technology is changing the way we connect face to face

The Ethics & Morality of Digital Technology

James Poulter is the ultimate collaborator. He empowers his team mates and shares his knowledge of digital trends and technologies at every opportunity. He is the first person to volunteer for a hackathon and is an exceptional facilitator of strategic partnerships.

In this new age of digital marketing and pr, there are few people in the UK that absolutely 'get it'. Those that do have been busy proving just how valuable this new way of doing things is to business and James Poulter is one of those people. Knows his stuff, explains it in an easy to understand way and keeps his eye on future trends and how it all fits together

James Poulter is full of energy, ideas, and passion for technology. He is a very strong networker and collaborator who is always looking to support new projects and initiatives and is focused on ensuring he has a strong knowledge and expertise on whatever the “next big thing” around the corner is.

One of the few people I've met that have the real ability to read people and situations well, and act on that knowledge in ways that lead to real interpersonal effectiveness. In the fast-paced and dynamic digital environment, there are some situations where entrepreneurs often find themselves struggling to steer safely out of a conversational jam - James Poulter definitely does not have that problem, he loves sharing his experience to help others build their business or community

How to book James Poulter for your event