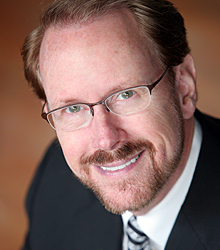 Have you ever wished you could predict the future — and be right? What would it be like if you could clearly see critical changes in the months and years ahead, and use those glimpses to shape that future, instead of just letting it unfold by default? the buzzwords of the past two decades —being agile, staying proactive, thinking outside the box — are no longer enough. In a world that is transforming at unprecedented and accelerating rates, it takes something more.

Daniel Burrus is considered one of the World's Leading Futurists on Global Trends and Innovation. The New York Times has referred to him as one of the top three business gurus in the highest demand as a speaker.

He is a strategic advisor to executives from Fortune 500 companies, helping them to develop game-changing strategies based on his proven methodologies for capitalising on technology innovations and their future impact. His client list includes companies such as Microsoft, GE, American Express, Google, Toshiba, Procter & Gamble, Honda, and IBM.

Daniel Burrus is also a featured writer on the topics of innovation, change and the future for CNBC, Huffington Post, and Wired Magazine to name a few. He has been the featured subject of several PBS television specials and has appeared on programs such as CNN, Fox Business, and Bloomberg, and is quoted in a variety of publications, including The Wall Street Journal, Financial Times, Fortune, and Forbes. He is the author of six books, including The New York Times and Wall Street Journal best-seller Flash Foresight: How To See The Invisible and Do The Impossible, as well as the international best-seller Technotrends.

Daniel has founded six businesses, three of which were national leaders in the United States in the first year. He is the CEO of a research and consulting firm that monitors global advancements in technology driven trends to help clients profit from technological, social and business forces that are converging to create enormous, untapped opportunities.

His accurate predictions date back to the early 1980s where he became the first and only futurist to accurately identify the twenty technologies that would become the driving force of business and economic change for decades to come. Since then, he has continued to establish a world wide reputation for his exceptional record of predicting the future of technology driven change and its direct impact on the business world.

Daniel Burrus will teach you how to spot and profit from future trends long before your competitors do. Just look at Apple, who accurately saw the trends of accelerating bandwidth, processing power, and high-capacity storage and harnessed them to create the megahits iPod, iTunes, iPhone and iPad. Meanwhile, Polaroid, Kodak and Motorola spent years clinging to analogue models while their competitors triumphed by grasping the arrival of the digital age and Blockbuster lost out to Netflix by failing to embrace the leap to virtual space.

Anyone can avoid the fate of Polaroid, Kodak, Motorola and Blockbuster, and instead create must-have products and high-demand services — as Apple, Canon, Netflix and so many others have — by seeing what others can't: the hard trends that are shaping our future. All it takes is learning where and how to look.

Daniel Burrus’ popular keynote speech themes include:
• Flash Foresight: Seven Radical Principles That Will Transform Your Business
• Accelerating Growth
• Leading with Strategic Foresight and Certainty
• Business Process Transformation: The Big Ideas That are Changing Everything
• Technology-Enabled Innovation: Creating and Sustaining Competitive Advantage
• Transforming How We Market and Sell: See the Invisible To Do the Impossible
• The Seven Pillars of Digital Marketing
• Transforming Healthcare With Technology-Enabled Innovation
• Transforming Education: Using Technology To Accelerate Learning

By applying the principles of Flash Foresight to our business, in less than a year we have been able to double our revenues and increase the value of our company by a factor of four, and we feel the biggest impact is yet to come.

You were fabulous! You received rave reviews from our participants for the relevancy, insight and expertise of your presentation material and style. You are the only keynote speaker we have invited back numerous times. I am convinced the extraordinary success of your continued contribution is due in no small part to the enormous amount of time you put into each presentation by customising it to fit the unique and challenging needs of our CMO audience each year.

Our people, without exception, felt that your ideas were provocative, original, and timely. Your entertaining style captured the audience and compelled them to listen, think, and apply your thoughts to their own professional and personal lives. You truly made a memorable impression on the audience.

"It came as no surprise that you were rated the top speaker in our audience evaluations. Your unique blend of wit and insight awakened all of us to the need to develop the knowledge network necessary to move to a 21st century mind set.

Your thoughts on how to create an opportunity for change through a customer focus is the excellence our team is striving for. The framework you provided on innovation, creativity and customer value will be instituted as a management practice to enable the technology infrastructure group to take Wells Fargo to the next stage.

Clients often ask about purchasing books for giveaways and delegate packs. Below you’ll find a selection of products by Daniel Burrus. Click the images to view on Amazon's website. For bulk orders, please speak with your Booking Agent.

How to book Daniel Burrus for your event