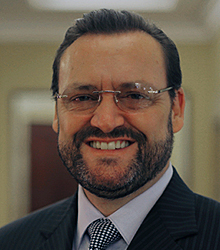 Ever wondered where big, game-changing breakthrough ideas come from? How do innovators manage to spot the opportunities for industry revolution that everyone else seems to miss?

Contrary to popular belief, innovation is not some mystical art that's forbidden to mere mortals. Here's the truth, innovation is systematic, it's methodical and we can all achieve it.

Rowan Gibson is widely recognised as one of the world's foremost thought leaders on business innovation. The media have labelled him “Mr Innovation”, “the Innovation Grandmaster” and “a guru among the gurus”.

Over the last two decades, Rowan Gibson's international clients have included some of the world's largest and most successful organisations. He teaches them how to seize new growth opportunities, create new markets and even transform entire industries by recalibrating their whole organisational system around the paradigm of innovation.

Rowan Gibson's keynote speeches, executive sessions and innovation masterclasses are always tailor-made to fit each audience, industry sector and event format. He endeavors, wherever possible, to use business cases and examples that are relevant to the specific audience.

Rowan is also a prolific writer. In addition to his bestselling books, he has authored dozens of business articles, columns and blogs which have been read all around the globe. He has been interviewed frequently on television and radio, as well as online and in the international press. His media appearances include Forbes, CNN, BusinessWeek, Harvard Business Review, and BBC World Service. He has also appeared in several business documentaries.

Rowan Gibson has lived and worked in various countries over the last twenty years and speaks three languages fluently. Today, he divides his time between writing, public speaking and consulting.

Keynote Speaking
Rowan Gibson is one of the world’s busiest and most popular public speakers. In the last five years alone, he has addressed audiences in 61 countries around the globe.

Rowan’s big-picture insights, compelling observations, fresh business thinking and upbeat presentation style have made him highly sought-after on the international speaker circuit. He mixes insight, inspiration and information in a way that always leaves an audience feeling energised.

Rowan’s keynote speeches are usually of up to 90 minutes in duration and are always tailor-made to fit each audience, industry sector and event format. He endeavours, wherever possible, to use business cases and examples that are relevant to the specific audience.

Rowan uses very graphic Powerpoint slides — each typically features just one powerful image and a single statement — which makes his presentations extremely dynamic. He is constantly updating his slides with cutting-edge material and up-to-the-minute business news.

These in-company events are generally 1-3 days in duration. They are designed to immerse an organisation’s key people in the skills and the tools of radical innovation, and to create a shared understanding among senior executives about what is necessary to make innovation a deep, sustainable enterprise capability.

Each masterclass is customised to fit the specific audience and industry sector, and includes facilitated breakout sessions as well as team presentations. Rowan provides the teams with all the tools and exercises they need for strategic insight discovery and radical idea generation.

The breakout sessions typically produce a wide portfolio of high quality insights and actionable ideas, which your company can then start to screen and align with strategy, with a view to funding new experiments and innovation projects.

Another outcome is specific and measurable goals which the executive team commits to at the conclusion of the masterclass, all aimed at embedding innovation into an organisation’s core managerial DNA.

The Four Lenses of Innovation
The Four Lenses of Innovation thoroughly debunks the pervasive myth that innovation is some mystical art that’s forbidden to mere mortals. By asking how the world’s top innovators such as Steve Jobs, Sir Richard Branson, Jeff Bezos and many others came up with their game-changing ideas, Rowan Gibson identifies four key business perspectives that will enable you to discover groundbreaking opportunities for innovation and growth:

• Challenging Orthodoxies What if the dominant conventions in your field, market, or industry are outdated, unnecessary, or just plain wrong?
• Harnessing Trends Where are the shifts and discontinuities that will, now and in the future, provide the energy you need for a major leap forward?
• Leveraging Resources How can you arrange existing skills and assets into new combinations that add up to more than the sum of their parts?
• Understanding Needs What are the unmet needs and frustrations that everyone else is simply ignoring?

Rowan Gibson is inspiring! The feedback on his sessions was awesome, and without a doubt he was instrumental as a trigger for our innovation agenda. His footprint in our efforts is evident and it is highly appreciated.

Rowan Gibson energized our associates and demystified the process of innovation. We fully intend to accelerate the momentum that has built up, and to put full-time senior resources behind driving the ideas that he shared.

Rowan Gibson's motivation and leadership have changed the dynamics of our organization.

Rowan is alive, he knows how to inspire.

The value lies in Rowan's ability to inspire you to look at innovation in a holistic way.

One of the most recognized thought leaders in business innovation.

Clients often ask about purchasing books for giveaways and delegate packs. Below you’ll find a selection of products by Rowan Gibson. Click the images to view on Amazon's website. For bulk orders, please speak with your Booking Agent.

How to book Rowan Gibson for your event