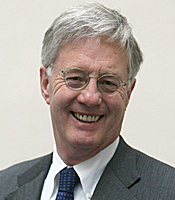 Hamish McRae is one of Europe's foremost speakers on future trends in economics, business and society.

As an economic journalist, he was editor of Euromoney and financial editor of The Guardian before moving to The Independent. His most recent awards are; Best Communicator in the 2007 Business Journalist of the Year Awards; Business and Finance Journalist of the Year in the 2006 British Press Awards; and the David Watt Prize for political and economic journalism in 2005.

Hamish has a masters degree in economics and political science from Trinity College, Dublin. And is a visiting Professor at the School of Management at Lancaster University and a council member of the Royal Economic Society.

He is married to Frances Cairncross, rector of Exeter College, Oxford. They have two grown-up daughters.

Hamish McRae is in demand around the world for his lucid insight into the current economic situation and how future trends are likely to affect business and governments.

His key topics are:-
• The World in 2020 – Future Trends
• The Global Economy
• The Rise of the Asian Economies
• Globalisation
• Technology
• Demography
• Energy Markets and Resources

Clients often ask about purchasing books for giveaways and delegate packs. Below you’ll find a selection of products by Hamish McRae. Click the images to view on Amazon's website. For bulk orders, please speak with your Booking Agent.

How to book Hamish McRae for your event