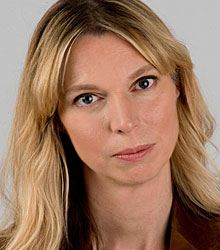 An award-winning columnist and broadcaster, The Rt. Hon Camilla Cavendish is a Senior Fellow at Harvard’s Kennedy School and Contributing Editor at the Financial Times. She sits in the House of Lords as an independent peer.

She was previously Head of the Prime Minister’s Policy Unit at 10 Downing Street under Prime Minister David Cameron and a Non-Executive Director of the Care Quality Commission, the hospital and care home regulator, and wrote the independent Cavendish Review of nursing.

She is currently a Senior Fellow at the Mossavar-Rahmani Center for Business and Government at the Harvard Kennedy School, where she is researching demographic challenges. Camilla is the author of the UK government’s sugar tax legislation.

She is chair of Frontline, a non-profit organisation which recruits top graduates into social work. Camilla writes the prominent weekly op-ed column in the Financial Times every Saturday, commenting on UK and international issues. She is also Contributing Editor to the Financial Times and is an occasional contributor to the Sunday Times where she was Assistant Editor.

Camilla was educated at Putney High School and graduated with a first class degree in philosophy, politics and economics from Oxford University in 1989. She also gained a degree of Master of Public Administration (MPA) from Harvard University.

Camilla Cavendish began her career at McKinsey & Company as a management consultant, and from 2002 until 2012 worked at The Times where she was Associate Editor, columnist and in 2010 Chief Leader Writer. She then worked at The Sunday Times from 2012 to May 2015.

From May 2015 to July 2016, Camilla was head of the prime minister's policy unit at No.10 Downing Street. Amongst her initiatives, she is credited with persuading the Prime Minister and his Chancellor about the benefits of a sugar tax; citing that the link between sugary drinks and obesity are clear and stark. The Soft Drinks Industry Levy came into force in April 2018.

She helped to found the lobby group London First, and was the first CEO of the not-for-profit trust South Bank Employers' Group, which masterminded the regeneration of the South Bank of the Thames in the late 1990s.

The world is undergoing a dramatic demographic shift. For the first time in history, the number of people aged 65 and over outnumber children aged five and under. But our systems are lagging woefully behind this new reality.

In Extra Time, Camilla embarks on a journey to understand how different countries are responding to these unprecedented challenges. Travelling across the world in a carefully researched and deeply human investigation, Cavendish contests many of the taboos around ageing.

Interviewing leading scientists about breakthroughs that could soon transform the quality and extent of life, she sparks a debate about how governments, businesses, doctors, the media and each one of us should handle the second half of life. She argues that if we take a more positive approach, we should be able to reap the benefits of a prolonged life. But that will mean changing our attitudes and using technology, community, even anti-ageing pills, to bring about a revolution.

Clients often ask about purchasing books for giveaways and delegate packs. Below you’ll find a selection of products by Rt Hon Baroness Camilla Cavendish. Click the images to view on Amazon's website. For bulk orders, please speak with your Booking Agent.

How to book Rt Hon Baroness Camilla Cavendish for your event

To book Rt Hon Baroness Camilla Cavendish, please submit an online enquiry, email bookings@nmp.co.uk or speak with one of our booking agents on +44 (0)1372 361 004.