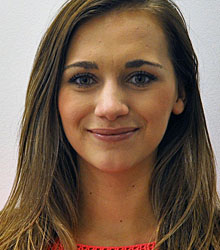 Grace Blakeley, is a former research Fellow for the Commission on Economic Justice at the Institute for Public Policy Research (IPPR) and writes for Tribune magazine. She also sits on the Labour Party's National Policy Forum.

As a journalist, economist and campaigner, Grace specialises in international economics and macro economic policy, with a particular focus on financial regulation, regional economics, housing and infrastructure, and advocating for radical policies to transform our economy.

Educated at Lord Wandsworth College and the comprehensive Sixth Form College, Farnborough, Grace graduated from Oxford with a First Class Honours Degree in Politics, Philosophy, and Economics, after which she studied for a master's degree in African Studies.

Having completed her education, Grace joined KPMG's Public Sector and Healthcare Practice as a management consultant. She then spent a year working on regional economic policy for IPPR North in Manchester to research and write about regional economic inequality in the UK, before relocating to London in 2016.

Grace’s research has been covered in both print and broadcast media, including spreads in the Guardian, the Times and the Independent. She is a prominent voice in the UK media, and features frequently on both radio and television.

She has appeared on numerous high-profile political programmes, including Question Time, Politics Live, and BBC This Week – as well as more popular shows such as Frankie Boyle's New World Order and BBC Breakfast. She has also appeared extensively on radio, including several appearances on the Today Programme and LBC.

Grace has written for various media outlets including the Independent, VICE, and Tribune. She featured in John McDonnell’s recent book Economics for the Many with a chapter on the UK’s regional problem and how it relates to UK macro-economic policy.

Throughout 2019, she was economics commentator at the New Statesman, where she hosted a fortnightly column on UK and international economic affairs and contributed to the website and podcasts, before leaving to take up a position as staff writer for the democratic socialist magazine Tribune in 2020.

Grace’s first publication, Stolen: How to Save the World from Financialisation (2019), is a readable economic history of the UK since 1970, which analyses the financialisation of the British and American economies. The book shows that a new economic model – finance-led growth – emerged in Anglo-America in the 1980s, and has deeply impacted all areas of economic activity – from households experiencing rising debt levels, to corporations' focusing on shareholder value, to governments increasingly outsourcing their spending to the private sector. This model ultimately collapsed in 2007, and Stolen traces many of the UK's current economic and political problems back to the growth and demise of finance.

Her second book, The Corona Crash: How the Pandemic Will Change Capitalism, was published in October 2020.

Blakeley is a prominent Eurosceptic and supported a left-wing version of Brexit. She argued that the EU is a barrier to a socialist economy and that building such an economy outside of it could serve as a "beacon of hope" to member states that are "struggling under the weight of the EU's neoliberal technocracy".

She advocates the UK ending free movement of capital and regaining full control of state aid as the priorities, and also supports maintaining free movement of people and promoting greater immigration from the parts of the world most affected by neo-colonialism.

Grace Blakeley believes in the importance of working on social infrastructure, investing in people through housing, education and health care. Which are just as important as transport and energy in allowing people to fulfil not just their economic potential but their social potential.

Grace Blakeley is a prominent sought-after public speaker, and has spoken at numerous conferences, panels and roundtable events on issues related to politics and economics.

Previous to these, Grace has also spoken at the Change Finance conference in Brussels, addressed academics at the University of Oxford on financial regulation since the crisis on a panel with John Vickers, former chief economist of the Bank of England; and she’s spoken at numerous panels at Labour party conference and The World Transformed Conference in Liverpool, including chairing a panel with former Deputy Leader, John McDonnell.

In 2019, Grace addressed the Progressive Economy Forum's conference on reforming the Bank of England.

She has also been invited to speak at numerous international conferences and summits, including in Norway, Germany, and the United States.

Grace is an energetic and well informed speaker. Our clients enjoy her input and she is a great contributor to debate, offering a different view to the more traditional economists and what may well be an insight in to the future and I look forward to hearing more of her views in the future.

Clients often ask about purchasing books for giveaways and delegate packs. Below you’ll find a selection of products by Grace Blakeley. Click the images to view on Amazon's website. For bulk orders, please speak with your Booking Agent.

How to book Grace Blakeley for your event