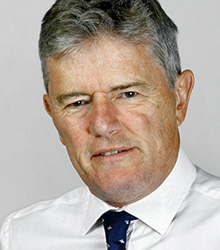 David Smith is The Sunday Times’ Economics Editor, where he has resided since 1989. He is also chief lead-writer, policy advisor and an assistant editor.

Born in the West Midlands, David Smith was introduced to economics while at West Bromwich Grammar School. He then studied further at Cardiff University, Oxford University and London. He started work life as an economic report writer for Lloyds Bank, before moving to a forecasting role at the Henley Centre. He then became an economics/business writer for Now! magazine, economics/deputy editor for Financial Weekly before moving to News International as economics correspondent for The Times in 1984.

In 1989, he transferred to its sister publication The Sunday Times as Economics Editor and has since expanded his role to include Policy Advisor and Assistant Editor.

David writes monthly columns for Estates Gazette and Tax Journal. He is a regular contributor to Quantum and other publications, and is the author of several publications including The Rise and Fall of Monetarism; Mrs Thatcher’s Economics, North and South, From Boom to Bust, UK Current Economic Policy, Eurofutures, Will Europe Work?, Free Lunch: Easily Digestible Economics, The Dragon & the Elephant: China, India and the New World Order, The Age of Instability: The Global Financial Crisis and What Comes Next, and Something Will Turn Up, Britain’s Economy Past, Present and Future.

David is an honorary visiting professor at both Nottingham and Cardiff University, and has lectured at Nottingham’s campuses in Malaysia and Ningbo China.

David Smith offers audiences the benefit of his considerable expertise and insights into the UK and current global economic outlook and the bigger issues which affect all major financial markets.

He skilfully cuts through the mind-numbing waffle that surrounds much of modern economics and demystifies complex issues; offering advice and opinion in a clear, concise and easily understood manner.

I should be grateful if you would pass on our thanks to David Smith for the excellent presentation he gave at our Finance Conference on Tuesday... it is clear that delegates were very enthusiastic about his presentation and felt that it was both interesting and amusing. This kind of summary is often rather dull but David kept everyone engaged throughout.

Clients often ask about purchasing books for giveaways and delegate packs. Below you’ll find a selection of products by David Smith. Click the images to view on Amazon's website. For bulk orders, please speak with your Booking Agent.

How to book David Smith for your event