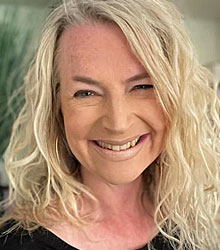 Sam McAlister is a former criminal law barrister turned TV producer who spent a decade negotiating, securing and producing exclusive interviews with some of the world's most high profile personalities.

As the BAFTA-nominated interviews producer on BBC 2's flagship news programme Newsnight, Sam's role was to facilitate head-to-head pieces with wide-ranging subjects from Silicon Valley CEOs and world leaders to Hollywood superstars. In doing so, she has negotiated with organisations from Buckingham Palace to The White House and from Facebook to Tesla.

Most notably, Sam McAlister led year-long negotiations for the groundbreaking interview with HRH Prince Andrew. The first time a senior royal had agreed to such a journalistic interview, and in the midst of an international scandal, it went on to make headlines around the world and have a serious impact on the Royal Family itself.

Working in a largely unseen role, Sam McAlister undertakes the delicate negotiations that underpin some of the biggest exclusive interviews in British news. From the initial approaches, through research and up to the filming itself, she builds, manages and maintains relationships with subjects and their representatives whilst all the time retaining journalistic integrity.

As well as the subjects themselves, she also worked closely with broadcasters including Emily Maitlis, Jeremy Paxman, Kirsty Wark, Evan Davis and Emma Barnett to brief them, write questions and rehearse the carefully planned features. She was also responsible for briefing them on topics as broad as Brexit, US politics, geopolitical issues, identity politics and culture.

With skills honed over a decade in the BBC's elite news programme, Sam McAlister is used to persuading reluctant individuals to participate in a news programme renowned for its rigour and bite.

Negotiation, strategy and public speaking have always been at the heart of everything that Sam has done — from her time as a criminal defence barrister to her many public speaking and debating prizes, and her dealings with celebrities and governments.

Sam McAlister has extensive experience speaking on panel debates, chairing conferences and hosting corporate awards ceremonies. She is also an adept and sought-after speaker both for keynote presentations and the more relaxed setting of after dinner engagements.

Keynote & After Dinner Speaking
Sam’s popular and most-requested keynote speaking topics include negotiation, the media, communication, interview techniques, women and the workplace and dealing with journalists.

However, responsible for briefing the BBC’s top political and current affairs presenters including Emily Maitlis, Jeremy Paxman, Kirsty Wark and Evan Davis — on topics as broad as Brexit, geopolitics, identity, domestic and US politics and culture — Sam is equally comfortable speaking on these themes herself.

Having negotiated directly with the Royal Household and HRH Prince Andrew himself for the Newsnight exclusive, Sam McAlister speaks revealingly about the careful personal and professional relationships that were key to the talks. She also looks at what the interview revealed about leadership, reputation and communication in the modern age.

With examples from other set-piece interviews, Sam also examines the practicalities of how to understand who you're dealing with, and what they'll be prepared to agree to. She dissects the persuasion, compromise, professional relationships and empathy required to develop both trust and understanding between all parties, and also asking the right questions – questions that will not be met with rejection or hostility, whilst still being searching and relevant to the audience.

Sam has spoken at two of our client-facing and company-wide events. Sam brings high energy, fresh perspective and is a delight to work with. Sam's high-level cultural, media and political insights have encouraged us to challenge our ways of thinking in business. Sam illustrates her points with engaging and entertaining personal stories leaving everyone walking away inspired and energised.

I’ve had the pleasure of working with Sam twice now and both times she’s enthralled her audience. A combination of journalistic nous, insider knowledge and candid humanity makes her a compelling and engaging speaker. Look no further!

Thank you for chairing the Advertising Standards Authority breakfast panel discussion on Regulating Online Advertising at the House of Commons. You were a brilliant chair, bringing together the different aspects of online ads, encouraging interaction amongst all panellists and with the audience. We’ve had very positive feedback about the panel - both from speaking to delegates and from the panellists. We appreciate your support for the event, and I hope we can work together again in future.

A huge thank you for all the work at the event, we have had fantastic feedback from all that were involved about the energy, professionalism and warmth you brought to the interviews and sessions. Thanks again and I hope we can work together again in the future.

Clients often ask about purchasing books for giveaways and delegate packs. Below you’ll find a selection of products by Sam McAlister. Click the images to view on Amazon's website. For bulk orders, please speak with your Booking Agent.

How to book Sam McAlister for your event