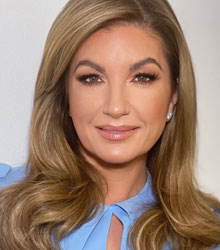 Karren Brady is one of the most influential, high profile and respected female business leaders in the UK.

As Lord Sugar's assistant on The Apprentice, Baroness Karren Brady of Knightsbridge CBE is probably best known as 'the first woman in football' after becoming Managing Director of Birmingham City FC at only 23 years old and turning the club's fortunes around.

Born in Edmonton, North London, Karren began her career in advertising sales straight after leaving school. In 1993 she was appointed Managing Director of Birmingham City Football Club when the club was in administration. In her first year at the helm, the club recorded a financial trading profit. In 1996 the Club made an overall profit for the first time in modern history and in February 1997 the Club launched on the Stock Market valued at the time of float at £25M; she was the youngest Managing Director of a PLC in the UK.

During her tenure at Birmingham City Karren Brady increased the average gate of the Club from 6,000 to a sell-out capacity of over 30,000 and, having turned Birmingham City around, Karren sold the club in 2009 for £82M. She joined the board of West Ham United in January 2010, and negotiated a successful bid for the club's move to London's iconic 60,000-seat Olympic Stadium. Under her leadership, West Ham has become one of the five fastest-growing brands in world football.

Karren has written five books; a factual account of her first season at Birmingham City, two novels, 'Playing to Win' about successful women in business and her own Sunday Times best-selling autobiography 'Strong Woman'. She is a regular contributor to The Sun and Guardian newspapers. Karren is also a judge of the Cosmopolitan Women of Achievement Awards and the Sports Industry Awards.

She is on the business Board of Scope, and is Ambassador for Birmingham Women's Aid. She has been a Board Director of Mothercare PLC, Channel 4 Television, Sport England and Arcadia. She was voted by Cosmopolitan as one of the 100 Most Powerful Women in the World in 2004 and again in 2006 when she attended The Queen's lunch for Women Achievers and Business Leaders.

In addition to her role as CEO of West Ham United Football Club, one of the leading London Premier League football clubs, currently valued at £800M, Karren Brady is also a Senior Non-Executive Director of Syco Entertainment — a company jointly owned by Simon Cowell and Sony — and the leading retail multinational Taveta Investments, owner of global brands including Topshop.

Voted Business Woman of the Year, Ultimate Entrepreneur and rated among the 50 most inspirational people in the world, Karren is passionate about business and the promotion of women in business in the UK.

Karren Brady's wealth of experience and passion for supporting entrepreneurs led to her appointment as the Government's Business Ambassador by then Prime Minister, David Cameron, in 2013. In December that year, she was awarded a CBE for services to women in business and entrepreneurship; the following August, she was elevated to the House of Lords by the Prime Minister, taking the title Baroness Karren Brady of Knightsbridge CBE.

Karren Brady is one of the most sought after keynote speakers in the world and has worked in over 30 countries, motivating and advising global businesses through her award-winning speeches.

Baroness Karren Brady CBE is one of the most sought-after motivational speakers and has travelled the globe inspiring and motivating audiences. She has, for the past decade been considered as one of the best speakers in the world on a range of topics that leave audiences inspired and motivated.

Keynote Speaking & Motivational Speaking
She delivers a straight-talking, genuine and personal account of how she built up her company and how she leads people towards change, whilst speaking passionately about how she succeeded in a man's world, sharing funny anecdotes and giving practical and inspiration advice to companies and individuals.

Topics include:
• How to get entrepreneurial spirit
• How to be the best you can be
• How to build a world class culture
• How to turn a failing business into a world class brand
• The top ten key ingredients you need to be a success

Women In Business
As someone who has broken the glass ceiling in a male-dominated industry like football, Karren Brady is a passionate champion of other women in business. She is the Chairman of Mentore, which works with businesses to harness the talents, ambitions and drive of women within their organisation, and ensure more women are appointed to senior management and Board positions.

Karren has said that, although she regards this as her most important role, it is also the one she would most like to see disappear, when we finally get to a stage in Britain when it is no longer necessary.

She also serves on the Department for Culture Media & Sport’s Women in Sport Advisory Board, set up to help increase the status, influence and participation of women in the world of Sport.

Supporting Entrepreneurs
In 2013, Karren was appointed as the UK government’s Small Business Advisor by the Prime Minister. In this role, she travelled up and down the country meeting small companies and entrepreneurs seeking to become tomorrow’s multinationals, and talking to them about what the government can do to support their ideas and ambitions. She also uses her position as a Conservative Life Peer in the House of Lords to keep small businesses high on the political agenda.

Inspiring Young People
Having been given her own chance in the workplace very early in life, and now with teenage children of her own, Karren Brady is committed to helping young people get their big break and fulfil their potential.

In 2013, she helped set up the Barclays LifeSkills Programme, with the aim of creating 50,000 new work experience placements for 14-16-year-olds. She acts as an Ambassador for the programme, and chairs the Lifeskills Advisory Council.

Karren Brady was great; inspirational, funny and straight-talking. She comes across as very genuine and her career success speaks for itself. We have had a lot of very good feedback from our guests who thoroughly enjoyed her speech. As a woman in business myself, I really enjoyed listening to her and I have consequently bought her book!

The feedback on your presentation at our Monaco conference has been exceptional. It certainly seems that you struck a chord with our staff, many of whom have said your presentation was both the highlight of the weekend and a really motivational experience.

Karren Brady's after luncheon speech was informative, motivational, humorous where needed and highly inspirational. She also agreed to a Q&A session as well and spent 30-40 minutes answering questions from the audience. The audience all commented on what an excellent speaker she was, how warm and engaging and extremely humorous. By far one of the best speakers we have enjoyed at City Luncheon. 10 out of 10.

Karren, thank you for making our dinner so memorable last week. You achieved what many consider to be unachievable - a silent audience during your talk! I have received many compliments saying that this was one of the best so far.

On behalf of Sage World 2010, I would like to thank you for your participation in the event earlier this month. The feedback received has been fantastic, and your involvement certainly contributed to the success of the event.

Clients often ask about purchasing books for giveaways and delegate packs. Below you’ll find a selection of products by Baroness Karren Brady CBE. Click the images to view on Amazon's website. For bulk orders, please speak with your Booking Agent.

How to book Baroness Karren Brady CBE for your event