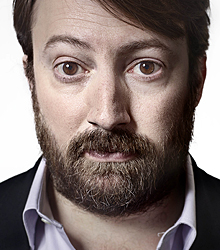 Comedian David Mitchell is best known for his long-running double-act partnership with fellow actor and comic Robert Webb, as much as his nerdy, highly intelligent, pop-culture and sport-eschewing persona.

He is the regular team captain on BBC One’s ever-popular Would I Lie To You opposite fellow comedian Lee Mack and presented Channel 4’s satirical current affairs show 10 O’Clock Live. He also presents Radio 4’s The Unbelievable Truth and has appeared on pretty much every British TV or radio panel show.

In 2016 David starred as William Shakespeare in Ben Elton’s six part comedy series Upstart Crow for the BBC which was subsequently commissioned for two further series.

David Mitchell grew up in Oxford and was miserable at a Dickensian primary school but happy at Cambridge University, where he studied history, was president of Footlights, and met his comedy partner Robert Webb. Together they have starred in the BAFTA-winning series That Mitchell and Webb Look and Peep Show. The latter of which received a BAFTA and won three British Comedy Awards while David Mitchell himself won the award for Best Comedy Performance in 2009.

Following the critical success of his memoir Back Story, his second book Thinking About It Only Makes It Worse: And Other Lessons from Modern Life, was published in 2014 David’s third book, Dishonesty Is The Second-Best Policy: And Other Rules to Live By was published in 2020 and attempts to make light of all the darkness in the dumbfounding times we live in.

As a writer, he also contributes comment articles to the British newspapers The Observer and The Guardian.

David Mitchell is a popular award host and presenter for corporate events.

Clients often ask about purchasing books for giveaways and delegate packs. Below you’ll find a selection of products by David Mitchell. Click the images to view on Amazon's website. For bulk orders, please speak with your Booking Agent.

How to book David Mitchell for your event