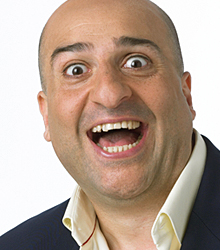 Omid Djalili is Britain's funniest Iranian stand-up comedian and a talented actor. His credits range from Hollywood films to television and the West End stage and recently starred in the Netflix Global drama The Letter For The King as Sir Fantumar and the HBO/BBC series His Dark Materials.

Following great success at the Edinburgh Festival Fringe in 1995, where he appeared with his Short, Fat Kebab Shop Owner's Son show, Omid has become a Festival Fringe favourite with a string of sell-out performances including Warm To My Winning Smile, Arab & The Jew, Omid Djalili Is Ethnic, and Behind Enemy Lines. In 2005, he broke the Edinburgh Festival box office records with over 16,500 ticket sales.

He has performed in numerous countries, including Australia, Ireland, Sweden, Belgium, Canada and the USA, where he had his own HBO Special and appeared in 22 episodes of the NBC sitcom Whoopi, with Whoopi Goldberg.

Omid’s parents, who are of the B'hai faith, came to England from Iran in the 1960s, mainly to see Carnaby Street, but they ended up staying in London. The young Omid grew up in Kensington, attending Holland Park School and then the University of Ulster, Northern Ireland, to study English and Theatre Studies.

In addition to his successful comedy career, Omid is a hugely talented actor, having starred in Hollywood films such as Gladiator, Notting Hill, The Mummy, The World Is Not Enough, Alien Autopsy, Spy Game, Mr Nice, Pirates of the Caribbean: At World's End, Sex and the City 2 and Mama Mia 2: Here We Go Again. He also starred in the 2010 David Baddiel-scripted movie The Infidel.

In 2005, Omid picked up an international film award for Best Supporting Actor in Casanova, starring alongside Heath Ledger and Jeremy Irons. Treading the boards of live theatre, he has also appeared as Fagin in Oliver! at the Theatre Royal, Drury Lane, London and gained rave reviews for his leading role of Tevvye in the Fiddler on The Roof at the Chichester Festival Theatre.

Omid Djalili has won numerous awards for his stand-up comedy, including an EMMA Award, Time Out Award and LWT Comedy Award for Best Stand-up Comedian, Spirit of the Fringe Award as well as the One World Media Award for his Channel 4 documentary, Bloody Foreigners.

He is available for corporate and private stand up comedy performances and for hosting corporate award dinners.

Right now, the Iranian Djalili is probably one of the most subversive, let alone funniest, comedians around...

To carve yourself out a career as the thinking person's Iranian comedian in this political climate takes a fine brain and a masterful way with the audience. There is no question that Omid Djalili possesses both...

Clients often ask about purchasing books for giveaways and delegate packs. Below you’ll find a selection of products by Omid Djalili. Click the images to view on Amazon's website. For bulk orders, please speak with your Booking Agent.

How to book Omid Djalili for your event