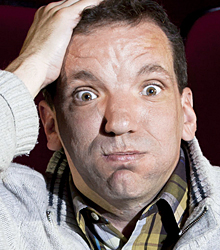 Henning Wehn is a self-appointed German Comedy Ambassador to The United Kingdom, which isn't the easiest of jobs because Germans allegedly do not have a sense of humour. However, throughout his comedy he effectively playing on the English stereotype of Germans as humourless Nazis, obsessed with efficiency.

Having moved to the UK in 2002, working in the marketing department of Wycombe Wanderers FC, Henning ‘took office' in 2003 after watching a comedy club open mic night that left him convinced that he would do better. He has been performing stand-up comedy ever since. Henning regularly appears with fellow German performer Otto Kuhnle, and their show 1000 Years of German Humour was nominated for the Barry Award at the 2009 Melbourne Comedy Festival. He also won the Hackney Empire New Act of the Year, 2005.

Henning Wehn's “beautifully crafted diatribes” (Time Out) are delivered with a passion that seems all too real and his material covers topics from football to the price of second-hand shoes, what the Germans think of our beloved 'Allo 'Allo series, to why humour is overrated and stand-up comedy pointless.

His numerous television appearances include 8 Out of 10 cats, Would I Lie To You, Have I Got News For You, QI, Ths Week and Ten O'Clock Live. Regular radio appearances include Radio 5 Live's Fighting talk, Radio 4's The News Quiz, The Now Show (Radio 4), The Unbelievable Truth (Radio 4) & Henning Knows Best (BBC Radio 2)

Clients often ask about purchasing books for giveaways and delegate packs. Below you’ll find a selection of products by Henning Wehn. Click the images to view on Amazon's website. For bulk orders, please speak with your Booking Agent.

How to book Henning Wehn for your event