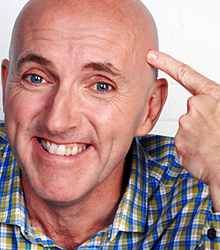 Lee Hurst is best-known as the former quirky and quick-witted team captain on BBC1's sporting quiz show, They Think It's All Over. However, Lee’s route to securing this role was anything but ordinary.

After ‘earning his spurs’ working the UK comedy circuit, Lee became the warm-up man for many TV shows including Have I Got News For You? The producer, Harry Thompson, needed a warm-up man for the pilot of a new comedy sports quiz, They Think It’s All Over, and hired Lee for the role. Unbeknown to Lee, Harry actually wanted him to star on the show. Although Lee Hurst had no sporting prowess and he knew next to nothing about football, he won over close to 12 million viewers each week with his quick-witted banter. Lee appeared as a team captain in the first five series of They Think It’s All Over until 1997.

Lee's other TV credits include presenting Shark Tank, Saturday Live, Salvage Squad and The Warehouse, and guest appearances on The Stand Up Show and Have I Got News For You. He was the creator of Bring Me the Head of Light Entertainment, which ran for five series on Channel 5 between 1997 and 2000.

On radio, Lee has appeared on The Steve Wright Show, Euromix, Two Men and a Transmitter and The Robert Elms Show. He was team captain on Hold The Front Page. He also presented Wriggling with Eels, a study of Cockney comedians for BBC Radio 4.

In 2000, Lee decided to semi-retire and concentrate on running his comedy venue, the Backyard Comedy Club in East London, acting as resident compere. Then in 2010 Lee closed the club, demolished the building, and in its place he built a seven storey hotel with the new Backyard Comedy Club on the ground floor. To keep busy whilst the new club was being built, Lee wanted to keep his hand in so he performed a show called ‘Man v Woman’ at a few venues round the country. This was well received and it spurred Lee on to secure a 50-date tour called ‘Too Scared to Leave the House’ and then another tour, ‘Things That Make You Go Aaarggh’. This was then followed by the 9th full tour show Lee has performed,‘Comedy Show No.9’ began in 2016 and was extended into 2017 due to huge demand.

Lee Hurst has performed for many corporate clients including Sony, Nissan, Mercedes, The Travel Advertising Awards, The Guardian, to name but a few and is an adept and sought-after awards host.

Lee Hurst kept everyone in hysterics and definitely gave us value for money.

Lee went down a storm. Very professional, very funny, and he stayed around in the bar afterwards and happily chatted to people.

The brief was to make 200 advertising types laugh their socks off - that is exactly what we got.

Clients often ask about purchasing books for giveaways and delegate packs. Below you’ll find a selection of products by Lee Hurst. Click the images to view on Amazon's website. For bulk orders, please speak with your Booking Agent.

How to book Lee Hurst for your event

Actor, TV presenter and original host of They Think It's All Over

Actor, TV presenter and original host of They Think It's All Over