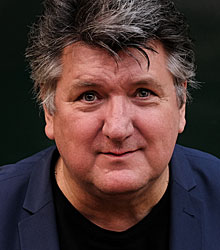 Comedian and presenter Bob Mills is best known for hosting ‘In Bed With Medinner’ during the 1990s, and more recently, since 2014 as a weekday presenter on radio station Talksport.

In Bed With Medinner was a late-night cult ITV show where Bob specialised in presenting a cynical view of life and its everyday objects, and in pastiches of popular culture icons with laddish irreverent humour.

Over the next ten years Bob established himself as one of the most successful live comedy acts in the UK, as well as putting together a string of acclaimed television credits: ‘There’s Only One Brian Moore’, ‘Dial Midnight’ (LWT), ‘Not A Lot Of People Know That’ (BBC1), as well as over 200 shows for VH1, including major documentaries with pop icons Eric Clapton, Phil Collins and Cher.

In 1995, Bob Mills starred in what he still considers to be his finest work to-date, Channel 4′s ‘The Show’; eight one hour programmes featuring fly-on-the-wall film of the making of a real chat show. It’s widely regarded as the template for much of the reality TV that followed throughout the nineties and noughties, and continues to dominate the schedules today.

Bob Mills co-wrote and produced Stan The Man, which starred John Thomson and Gaynor Faye, the six-part comedy-drama Northern Lights which starred Mark Benton and Robson Green, as well as an episode of Shameless and the feature length film ‘Pierrepoint’ that starred Timothy Spall.

As a radio broadcaster, he presented his own weekday programme on Greater London Radio (GLR) during the 1990s from 10pm to 1am. And in addition to currently presenting on Talksport, he’s also a regular pundit on BBC Radio Five Live's, Fighting Talk’.

Bob is an avid supporter of Leyton Orient, and has written a regular column in the club’s match day programme.

How to book Bob Mills for your event