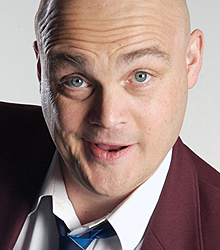 After studying History at Oxford and rubbing shoulders with the likes of Stewart Lee, Ben Moor and Richard Herring in the Oxford Revue, Al Murray wrote for Week Ending and Spitting Image, and started to work as a solo act.

He supported Frank Skinner on his world tour of 1992, taking his act (based around sound effects) with him, but soon became bored with the rigidity of his material. Fortunately, in the same year, he met Harry Hill at a Radio 4 commissioning meeting. After subsequently performing stand up with Murray at the Edinburgh Festival, Hill asked him to come up with an act for his Pub Internationale show. In 1994, Murray created the Pub Landlord.

He appeared as Harry Hill's big brother Alan in The Harry Hill Show from 1997-2000. After a wrangle as to whether he was 'too famous' to win it, Murray won the Perrier Award with a show based around the Pub Landlord character in 1999. This led to stage shows including And A Glass Of White Wine For The Lady, My Gaff, My Rules and Who Dares Wins. He also completed the television series Time, Gentlemen, Please.

In 2004 he was one of ten celebrities to take part in a then-new reality TV show Hells Kitchen, featuring award winning chef Gordon Ramsey. More used to pulling pints than cooking pies, Murray and the others had just a week to learn how to become chefs. The celebrities worked under the expert guidance of the Michelin Star winning Gordon Ramsey, who's as famous for his temper as his cooking. Those who fell foul of Gordon's wrath were voted off as the show progressed. The winner was ex-Brookie actress Jennifer Ellison.

Al Murray is now one of the most recognisable and successful comics in the UK with his alter-ego, The Pub Landlord. His British Comedy Award Winning ITV1 series Al Murray's Happy Hour has delighted both viewers and critics alike with his no nonsense treatment of his celebrity guests.

He is also one of the few stand-up comedians to be asked by ITV to perform two ‘Audience With’ shows.... Al Murray's Multiple Personality Disorder (ITV1) saw him introduce a whole host of new characters and demonstrate his vast comedic range.

Al's other TV appearances as The Pub Landlord includes three appearances on The Royal Variety Performance (ITV1), hosting both Live At The Apollo (BBC1) and Edinburgh and Beyond (Paramount Comedy Channel) and his edgy quiz show Fact Hunt (ITV1). He has also released six best selling live DVDs My Gaff, My Rules, Glass of White Wine For The Lady, Giving it Both Barrels, Live At The Palladium, The Beautiful British Tour and Barrel of Fun.

Out of character, Al has hosted Al Murray's German Adventure, BBC Four, an historical series about the art and culture of Germany (without mentioning the War) as well as appearances on What's So Funny...(Channel 4), That Sunday Night Show (ITV), Frank Skinner's Opinionated (BBC2), Have I Got News For You (BBC1) and The Road To Berlin, a 10 episode documentary series on WWII for Discovery.

Al's huge stand-up tours have made him one of the most popular live comedy acts in the country, with sell out shows including the O2 Arena. He won the Perrier Award (after a record four successive nominations) and secured Olivier Award nominations for both of his celebrated sell-out West End runs. Internationally, Al has forged an enviable reputation with numerous sell-out runs in Melbourne, Sydney, Montreal and New Zealand.

This 20–30 minute speech is interesting, engaging and, of course, extremely funny and entertaining. Al takes the audience through the story of his headlining-hitting campaign standing against Nigel Farage in South Thanet in the 2015 general election, making comic observations about the state of democracy, comedy, ingenuity and why some people didn’t get the joke!

Ideal for audiences used to politicians and satirists as after dinner speakers – or anyone who simply wants a speaker with an interesting story to tell.

One of the most recognisable and successful comics in the UK, for over 20 years corporate clients have chosen to hire Al Murray and his alter-ego, The Pub Landlord, to surprise and delight their guests.

Al regularly hosts company and industry awards ceremonies, gala dinners and performs after dinner stand up comedy sets that are guaranteed to bring outrageous humour and energy to your next event.

A dab hand at hosting corporate quizzes too, and other commercial events, Al’s experience and quick-witted audience banter make him the ideal choice for hosting or performing comedy.

Well known for his improvisation and ‘audience play’, Al Murray will involve the audience, delivering a unique show that will leave your guests on a high and create memories for years to come.

For an additional fee he can perform alongside his pub band, providing stings and walk-on music for awards dinner. Al Murray also hosts his very own Pub Quiz. Al and his team will write a quiz that is utterly bespoke to your company – the perfect way to make your event that extra bit special and unique. Please ask for further information.

Al Murray was FANTASTIC!! The pub quiz was such good fun and really made the night. Thank you so much for your efforts in making it happen. Please pass on our thanks and gratitude to Al and his team - not only for the show but hanging around afterwards and having a chat with everyone in the bar. It was a great night all round.

Al Murray, The Pub Landlord's Pub Quiz had all the right ingredients for a great evening: fun, humour, competitiveness, more fun, teamwork, more humour, a frozen turkey and even more fun. It was brave of Al Murray to enter an arena peppered with bookers of corporate entertainment, sitting with arms folded and thinking, “He had better make me laugh, I have just had a day of meetings with lighting engineers and stage designers.” Al Murray delivered. Arms unfolded, thoughts of the day's meetings dissolved into the laughter that took over the room and the only problem left was how the teams could agree on their answers quickly enough to catch the next joke. He is the answer to “What are we going to do this year?”

Al Murray was amazing last night. I really don't know what we would have done without him. It was a tough crowd but he handled them expertly. Very sharp and clever and knowing. He just got them straight off and then found the right angles. Masterful. I cannot thank you and Al enough for making last night such a success. And Al was never anything short of utterly professional and a joy to be with. What a guy. Would love to meet up soon and talk talent for next year!"

Al Murray was hilarious. He did a brilliant job, set the audience alight from the start, connected with them perfectly and clearly knew what we were after. In particular he really amped up the awards, getting laughs all the way through. Not all comedians do this, so we were delighted he made this (potentially very dry) bit his own.

Just thought I'd let you know that the feedback we've had on Al Murray has been tremendous. He scored perfect marks from our sponsors which is unheard of. So we now need to start thinking about next year… It's going to be a very hard act to follow!

Al Murray was AWESOME. He really got it spot on. Client also said he was fantastic and went down really well. Thank you for all your help with it, and please pass our thanks onto Al.

Al Murray was amazing last night. I really don't know what we would have done without him. It was a tough crowd but he handled them expertly. Very sharp and clever and knowing. He just got them straight off and then found the right angles. Masterful. I cannot thank you and Al enough for making last night such a success. And Al was never anything short of utterly professional and a joy to be with. What a guy!

Al was lovely and hilarious.

Clients often ask about purchasing books for giveaways and delegate packs. Below you’ll find a selection of products by Al Murray. Click the images to view on Amazon's website. For bulk orders, please speak with your Booking Agent.

How to book Al Murray for your event