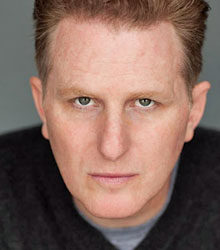 A true Manhattan New Yorker through and through, Michael Rapaport is an American movie actor and self-titled “disruptive” comedian. He has appeared in over sixty films since the early 1990s and starred in the sitcom The War at Home. He also appeared in Boston Public, Friends, Prison Break, Justified, and Atypical.

Following high school graduation — which came after a series of expulsions — Rapaport moved to Los Angeles to try stand up comedy, but he never lost, forgot or deserted his New York roots. It's embedded throughout his work both as an actor and comic, and is a major part of his low-keyed charm and enduring appeal.

Within no time Michael had moved from the live comedy stage to working in front of a camera, and he was hooked. One thing led to another, literally, and he clinched a string of standout parts in films, such as Christian Slater's pal in True Romance (1993), an edgy collegiate-turned-skinhead in Higher Learning (1995) and a sympathetic none-too-bright boxer in Woody Allen's Mighty Aphrodite (1995), all enabling him to build his profile.

In the years to follow, Michael managed to demonstrate his ease at offbeat comedy with a kid-like, goofy charm as Lisa Kudrow's cop boyfriend for several episodes on Friends (1994) and as teacher Danny Hanson on Boston Public (2000).

For the most part, Michael Rapaport’s acting career served him extremely well supporting other prominent stars with weird-to-bizarre featured roles for Woody Allen in his crime comedy Small Time Crooks (2000); Arnold Schwarzenegger in The 6th Day (2000); for Will Smith in the rom-com Hitch (2005); Billy Bob Thornton in the action comedy The Baytown Outlaws (2012); for Sandra Bullock and Melissa McCarthy in the crime comedy The Heat (2013); and for Tom Hanks in the biopic Sully: Miracle on the Hudson (2016).

How to book Michael Rapaport for your event