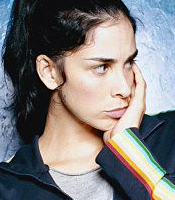 Emmy-winner Sarah Silverman is as versatile of a performer as they come. Her repertoire includes everything from film and television, stand-up comedy, to iconic online videos, and she added author to this list when she released a book in 2010, the New York Times bestseller, The Bedwetter: Stories of Courage, Redemption, and Pee.

Sarah was recently seen in Seth MacFarlane's A Million Ways to Die in the West opposite Charlize Theron, Liam Neeson and Amanda Seyfried. In 2014, she earned the Emmy for Outstanding Writing for a Variety Special for her hour-long stand-up special, “We are Miracles,” on HBO. Additionally, Sarah Silverman is a part of JASH, a new comedy collective on YouTube featuring original content by Silverman (and friends Michael Cera, Tim & Eric and Reggie Watts).

Sarah Silverman was nominated for a 2009 Primetime Emmy in the Outstanding Actress in a Comedy Series category for her portrayal of a fictionalized version of herself in her Comedy Central series The Sarah Silverman Program. This marked Comedy Central's first ever Emmy nomination in a scripted acting category. She also received a WGA nomination for her work on the show.

Sarah won a Primetime Emmy in 2008 in the Outstanding Original Music and Lyrics category for her musical collaboration with Matt Damon. In addition, she was honoured with a Best Actress Webby Award for her online video “The Great Schlep,” in which she persuaded young Jewish kids to encourage their grandparents in Florida to vote for President Obama prior to the 2008 election.

Sarah Silverman voiced a character in the Oscar-nominated Disney animated film Wreck It Ralph, and she was also seen starring in the dramedy Take This Waltz. In 2004 she made an impressive splash with her concert film Sarah Silverman: Jesus is Magic. The film garnered major attention at the Toronto Film Festival and created huge national buzz. Her other film credits include, Peep World, I Want Someone to Eat Cheese With, The School of Rock, There's Something About Mary and The Way of The Gun.

Sarah co-starred on the Fox comedy Greg the Bunny, and has guest starred in a slew of acclaimed and notable television shows such as the Emmy-nominated drama The Good Wife, and Monk, which earned her an Emmy nomination in 2008 in the Outstanding Guest Actress in a Comedy Series category, The Larry Sanders Show, Seinfeld, and Mr. Show with Bob and David. Sarah also lent her voice to the Comedy Central show, Crank Yankers.

She was dubbed “the most outrageously funny woman alive”, by Rolling Stone. With her comedic timing and stage presence it's no surprise that Sarah has been asked to host major award shows. In 2007 she hosted the MTV Movie Awards and she has also twice hosted the Independent Spirit Awards.

Sarah Silverman joined Saturday Night Live in 1993 as a writer and feature performer and has not stopped working since.

Clients often ask about purchasing books for giveaways and delegate packs. Below you’ll find a selection of products by Sarah Silverman. Click the images to view on Amazon's website. For bulk orders, please speak with your Booking Agent.

How to book Sarah Silverman for your event