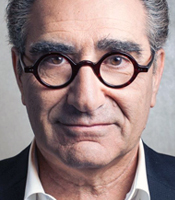 Eugene Levy has appeared in over fifty motion pictures, seven of which having topped the one hundred million dollar mark. His box office success in films, like Bringing Down the House, Cheaper by the Dozen 2 and Father of the Bride Part II helped establish him as one of Hollywood's most popular comedic character actors.

However, it was his role as “Jim's Dad” in the billion dollar American Pie franchise that cemented his reputation as being America's favourite dad. He is also the only original cast member who has appeared in all eight American Pie films.

Perhaps Eugene Levy's biggest career achievement outside of the American Pie series was his work for the musical comedy A Mighty Wind. He was awarded a Satellite Award for Best Supporting Actor in a Musical or Comedy as well as the New York Film Critics Circle Award for Best Supporting Actor for his role in the movie. He was also awarded a Grammy in 2003 for Best Song Written for a Motion Picture, Television or Other Visual Media for the title song in A Mighty Wind. Also in 2008, the Governor General of Canada presented Eugene with the Governor General's Performing Arts Awards (GGPAA),a lifetime achievement award considered Canada's “most prestigious artistic honour”.

In 2011, Eugene was made a Member of the Order of Canada “for his contributions as a comic actor and writer, and for his dedication to charitable causes”.

Clients often ask about purchasing books for giveaways and delegate packs. Below you’ll find a selection of products by Eugene Levy. Click the images to view on Amazon's website. For bulk orders, please speak with your Booking Agent.

How to book Eugene Levy for your event