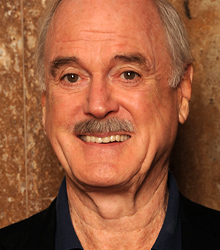 Best known for his brilliant humour and classic television and film performances, John Cleese is also an extraordinarily popular keynote speaker and after dinner speaker who enthrals packed audiences worldwide.

Often named the funniest man alive, John Cleese is both a versatile comedic actor and a leading business motivator. With the legendary Monty Python's Flying Circus, Fawlty Towers and A Fish Called Wanda under his belt, he created a unique comedic style that has inspired countless writers and comedians.

John Cleese achieved initial success at the Edinburgh Festival Fringe and as a scriptwriter / performer on The Frost Report. In the late 1960s he became a member of Monty Python, the comedy troupe responsible for the sketch show Monty Python's Flying Circus and the four Monty Python films: And Now for Something Completely Different, The Holy Grail, Life of Brian, and The Meaning of Life.

In the mid 1970s, John Cleese and his first wife, Connie Booth, co-wrote and starred in the British sitcom Fawlty Towers. Later, he co-starred with Kevin Kline, Jamie Lee Curtis, and former Python colleague Michael Palin in A Fish Called Wanda and Fierce Creatures. He also starred in Clockwise, and has appeared in many other films, including two James Bond films as R/Q, two Harry Potter films and three Shrek films.

However, John Cleese's influence is also felt in the corporate world as the founder of Video Arts, the world's largest provider of business training programs. Established in 1972 with three fellow British actors, Video Arts has gained an international reputation as the premier source for business know-how.

John Cleese attributes his success at making hit training programs to his fascination with psychology and his love for teaching and making people laugh. He believes that “humour in training increases retention and decreases anxiety. When the training point is surrounded with humour, it can be readily digested, remembered and applied”.

On the corporate speaking circuit, John Cleese employs boundless energy and his inimitable sense of humour create a hilarious exploration of business basics, from corporate etiquette and customer service to creative thinking and problem solving.

Let me just say that John Cleese was exceptional in every way. Our best speaker to date.

Clients often ask about purchasing books for giveaways and delegate packs. Below you’ll find a selection of products by John Cleese. Click the images to view on Amazon's website. For bulk orders, please speak with your Booking Agent.

How to book John Cleese for your event