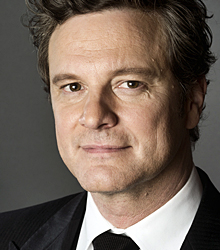 Colin Firth first garnered public attention for his portrayal of Mr Darcy in the 1995 TV adaptation of Pride and Prejudice. Now a household name star of stage and screen, he subsequently achieved film stardom with the international box-office success of Bridget Jones's Diary trilogy and became established as a light comic leading man in latter films including The Kingsmen.

However, it was his leading role in fashion designer Tom Ford's directorial debut, A Single Man, that gained him awards attention like he had never received previously, including his first Academy Award nomination and a BAFTA. In 2011 he was awarded an Oscar for his performance as King George VI in The King's Speech.

Colin Firth's first acting experience came in infant's school when he played Jack Frost in a Christmas pantomime. He spent two years at the Drama Centre in Chalk Farm where he was "discovered" while playing Hamlet during his final term. His first professional role was as Bennet in the West End production of Another Country. From this performance, he was chosen to play the character of Judd in the movie of the play.

Colin went on to play a variety of character parts in both film and television. He's had massive successes in Shakespeare in Love, A Christmas Carol, Bridget Jones: The Edge of Reason, Love Actually, Blackadder: Back & Forth, Fever Pitch and Conspiracy to name but a few.

Colin Firth has campaigned for the rights of indigenous tribal peoples and is a member of Survival International. He has also campaigned on issues of asylum seekers and refugees' rights and the environment. He commissioned and is credited as a co-author on a scientific paper on a study into the differences in brain structure between people of differing political orientations.

Colin Firth was awarded an honorary degree in October 2007 from the University of Winchester, and in January 2011 he was presented with the 2,429th star on the Hollywood Walk of Fame. In April 2011, Time magazine included him in its list of the world's 100 Most Influential People. Colin Firth was appointed Commander of the Order of the British Empire (CBE) in the 2011 Birthday Honours for services to drama, and made a Freeman of the City of London in 2012.

Perhaps one of the most recognised and revered English actors today, Colin Firth is an authoritative and compelling speaker, both keynote and after dinner, whose strengths lie in his focused thinking, careful craftsmanship and mastery of technical skills.

Renown for leading roles in films such as Pride and Prejudice, Bridget Jones’ Diary, The King's Speech and more recently, The Kingsmen, Colin Firth is a hugely talented and respected actor who has carried his adolescent sense of rebellion around with him to great effect. Well grounded and pragmatic, he is an exacting perfectionist with a clear, logical, analytical mind and an aptitude for hard work and an ability to talk articulately, candidly and humorously about his professional experiences as an internationally recognised actor.

How to book Colin Firth CBE for your event