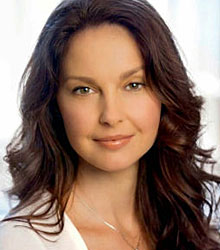 Ashley Judd is well known for dextrously starring in both box office hits and for turning in unforgettable performances in fine independent films. From her debut in Sundance Film Festival grand jury prize winner Ruby In Paradise to Where the Heart Is, Simon Burch, Helen, De-Lovely, and Divine Secrets of the Ya-Ya Sisterhood, her films tell very personal stories — which is exactly what Ashley does when she is not making movies.

But the stories she tells are not about being a Golden Globe and Emmy-nominated actress or about making People magazine's "50 Most Beautiful People" list three times. As a board member for Population Services International (PSI) and as Global Ambassador for YouthAIDS, Ashley Judd speaks on behalf of those who cannot speak for themselves.

She has travelled the world to do international public health work on all fronts — maternal health, child survival, human rights, family planning, STD and HIV prevention, and malaria prevention and treatment. Ashley Judd has experienced firsthand the connection between poverty, illness, and gender inequality, and how that sets up the pain and degradation that is sex and labour slavery (on which she testified before the General Assembly of the United Nations).

Ashley says, "The more we hear their stories, the more motivated we are to heal them and the social systems that victimised them in the first place. I believe with all my soul that the art of compassionate witnessing is at the core of global change and peace building."

She is also passionate about the environment. An eighth generation Kentuckian, she is an outspoken critic of mountaintop removal coal mining. A proponent of a "green collar" economy, Judd is committed to helping find innovative renewable energy solutions.

In May, 2010, Ashley Judd received her Master's Degree in Public Administration from Harvard's John F. Kennedy School of Government. She has spoken at many prestigious conferences around the world, including the London School of Economics' Family Planning Summit, sponsored by the Bill & Melinda Gates Foundation.

She also hosted a talk with President Clinton on the work of the Clinton Foundation for the London School of Economics. In 2012, she spoke on the floor of the Democratic National Convention as the delegate from Tennessee asked to cast the ballots for the party's nominee for president and vice president.

Whether it's on behalf of a patient dying from a preventable illness a world away or on behalf a family struggling to find clean drinking water in Appalachia, Ashley Judd is telling the stories of the vulnerable and the at-risk.

A glamorous film and stage actress might be the last person you’d expect to be holding the hand of a child in a slum in Mumbai…or travelling to Kenya, South Africa, Thailand, Cambodia and India to talk about condom use, hygiene and sanitation, legal empowerment, or access to micro-financing.

She might not be who you’d picture visiting with families in Appalachia whose children draw water as black or red because they don't know creek water is supposed to run clear — or who listens to stories of busted unions and miners with chronic health problems — Ashley Judd is such a person.

From horrifying brothels and degrading slums in Third World countries to environmentally ravaged communities here in America, Ashley Judd is committed to telling the stories of the people she meets. Far from being a perfect "Mother Teresa-like" figure, Judd has been very open about her own struggles, including depression.

She believes that mental illness need not be treated with a sense of secrecy or stigma, and that her own journey has made her an even more effective advocate for others facing their own issues.

"Because I finally faced my past, and realised that where I come from, and what happened to me, and how I participated, is not who I am — today I can live happy, joyous, and free," says Judd.

Ashley Judd is an impressive presenter, stunning audiences with information that not only educates, but stirs the spirit. Articulate, passionate, but not without humour, her experiences regarding the human condition are universal principles, applicable to all, whatever their personal creed.

One does not have to travel the world as she does in order to make a difference. Ashley Judd shares her experiences and the power one voice has to impact the lives of others.

To hear Ashley Judd speak is to be forever moved and inspired to action.

Thank you for delivering an illuminating keynote address. The empathy and intelligence shown in the stories you told about children, women, and men throughout the world made your presentation mesmerising. And you accomplished this feat with few props, several great photos, a few quotations on screen, and glimpses of your own life woven into the narrative.

Ashley Judd brought such a broad and human perspective to our conversation about women's leadership - she used great empathy, personal stories, and just the right amount of wit to connect with the audience in the theatre and online. It's not easy to share the stage with Senators and police chiefs, but Ashley's thoughtful perspective on how women's lives prepare them to lead was absolutely a central part of our panel discussion.

Awesome doesn't begin to describe it. You would have been proud, moved, and inspired. It could not have been a better evening or panel. The theatre was sold out and overflowing with 2800 people. Ashley Judd was wonderful from start to finish in every way, and she was so warm and gracious with everyone she met.

Our event was spectacular! Ashley Judd gave a phenomenal presentation, that impacted people greatly. Ashley articulated the trauma of abuse better than anyone I have ever seen! I think the program was incredibly educational and one of the best events the YWCA of San Diego County has produced. Thank you for your assistance with Ashley. I really enjoyed meeting her and working with her. She is an amazing woman.

Clients often ask about purchasing books for giveaways and delegate packs. Below you’ll find a selection of products by Ashley Judd. Click the images to view on Amazon's website. For bulk orders, please speak with your Booking Agent.

How to book Ashley Judd for your event