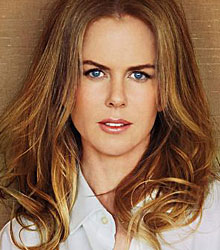 Academy Award-winning actress Nicole Kidman first came to the attention of American audiences with her critically acclaimed performance in the 1989 Australian psychological thriller Dead Calm. She has since become an internationally recognised, award-winning actress known for her range and versatility.

Born in Hawaii, to Australian parents — a biochemist and clinical psychologist father and a nursing instructor mother — the Kidman family moved to Sydney when Nicole was three and she soon developed an early love for ballet, mime and drama. She knew from a very young age that she wanted to build her life around acting.

Her first acting role was as a sheep in a school nativity play. She was five years old. Age 10, Nicole had joined an acting school and within four years she had her first lead role in the Australian film Bush Christmas. Her dedication to acting led to Australian Film Industry Award nominations when she was just 14 for BMX Bandits).

By the time Nicole was 19, the acclaimed Hollywood director George Miller (Babe, Happy Feet) had written the TV mini-series Vietnam and Bangkok Hilton for her to feature. The former of which earned her an AFI Best Actress award at age 17.

In 2002, Kidman was honoured with her first Oscar nomination for her performance in Baz Luhrmann’s innovative musical, Moulin Rouge! For that role, and her performance in writer/director Alejandro Amenabar’s psychological thriller, The Others, she received dual 2002 Golden Globe nominations, winning for Best Actress in a Musical.

In 2003, Kidman won an Academy Award, a Golden Globe Award, a BAFTA Award and a Berlin Silver Bear for her portrayal of Virginia Woolf in Stephen Daldry’s The Hours.

The then starred opposite Aaron Eckhart in Rabbit Hole, for which she received Academy Award, Golden Globe, Screen Actors Guild and Independent Spirit Award nominations for Best Actress. The film was developed by Kidman’s production company, Blossom Films. In 2012, she starred in The Paperboy with Matthew McConaughey, Zac Efron and John Cusack. Her performance earned her an AACTA, Screen Actors Guild and Golden Globe nominations.

In 2014, Kidman was seen in Grace of Monaco, which earned her a SAG nomination. In 2015 she was seen in The Secret in Their Eyes, The Family Fang with Jason Bateman, which she also produced, and Genius alongside Colin Firth.

In 2016, she acted in Lion with Dev Patel, for which she received Critics’ Choice, Globe, SAG, BAFTA and Oscar nominations. Nicole was more recently seen in Karyn Kusama’s Destroyer, which earned her a Golden Globe nomination, Joe Edgerton’s Boy Erased, AQUAMAN and The Upside.

In television, she starred in HBO’s Hemingway and Gellhorn alongside Clive Owen in 2012. Her portrayal as Martha Gellhorn earned her Emmy, SAG and Golden Globe nominations. Kidman returned to the small screen in 2017 with the limited series Big Little Lies alongside Reese Witherspoon for HBO, for which she received an Emmy Award, Golden Globe, Critics Choice Award and SAG Award.

In 2018, her production company signed a first-look deal with Amazon Studios. Under the agreement, she is developing theatrical and series content.

In theatre, Kidman made a highly-lauded London stage debut in the Autumn of 1998, starring with Iain Glen in The Blue Room, David Hare’s modern adaptation of Schnitzler’s La Ronde. For her performance Kidman won London’s Evening Standard Award and was nominated in the Best Actress category for a Laurence Olivier Award. In 2015, she was seen on the West End stage in Anna Ziegler’s Photograph 51, for which she received a London’s Evening Standard Award.

In January of 2006, Kidman was awarded Australia’s highest honour, the Companion in the Order of Australia.

She was also named, and continues to serve, as Goodwill Ambassador of the United Nations Development Fund for Women, UN Women, whose goals are to foster women’s empowerment and gender equality, to raise awareness of the infringement on women’s human rights around the world and to end violence against women.

In 2017, the Cannes Film Festival honoured Nicole Kidman with a special award for her body of work and long-standing history with the festival. She is one of only eight people to ever receive this honour in the 70-year history of the festival.

Award-winning actress, activist and Goodwill Ambassador, Nicole Kidman is above all things a devoted wife and mother. She is never happier than when she’s spending time with her family. She is married to country music star Keith Urban and they have a 2 daughters. She also has two older children from her first marriage to Tom Cruise.

She was thoroughly inspirational from her first word through her last. Thank you for bringing such candour, authenticity, wisdom and inspiration to our stage... our gratitude is boundless.

She was amazing! Our attendees really enjoyed her.

How to book Nicole Kidman for your event